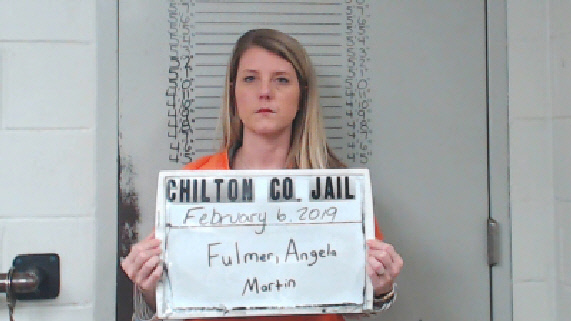 Angela Fulmer was arrested by the State Bureau of Investigation on Feb. 6 and charged with burglary of a residence not using force. (CONTRIBUTED)

The chief clerk of the Chilton County Tag Office and wife of a local police chief was arrested on Feb. 6. by the State Bureau of Investigation.

Angela Martin Fulmer, 40, has been charged with the alleged burglary of a residence without using force. She was booked into the Chilton County Jail at 3:14 p.m. on Feb. 6 and released less than an hour later after signing her own $5,000 bond.

Angela Fulmer is the wife of Jemison Police Chief Shane Fulmer and a contracted court reporter.

According to 19th Judicial Circuit Chief Assistant District Attorney C.J. Robinson, his office is submitting a letter of recusal to the state attorney general’s office and will not work on the case due to Fulmer’s work as a court reporter as well as being married to a local police chief.

No further information is available at this time. This story will be updated.