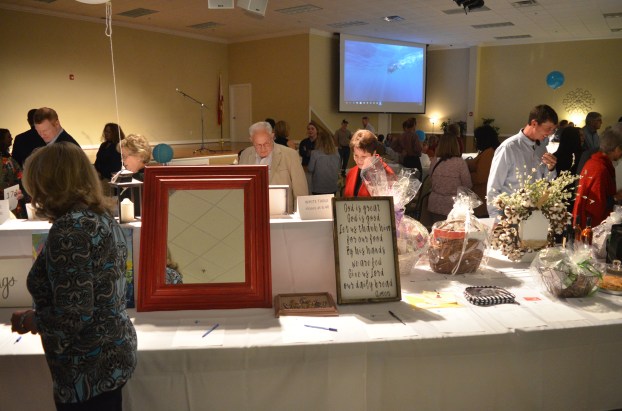 Flutter attendees peruse a table of items during the silent auction portion of the event. (J.R. TIDWELL/ADVERTISER)

*Update — Per Butterfly Bridge, once everything was tallied up it was determined that Flutter had raised $40K, not the $35K previously reported, which was the total given at the event.

What do a basketball signed by Auburn coach Bruce Pearl, a motor oil change for a boat, a cake, a weeklong trip to Destin, Florida, and a 12-gauge shotgun all have in common?

Each of these items were among the multitude of donations auctioned off during Butterfly Bridge Children’s Advocacy Center’s annual Flutter event held at Jemison Municipal Complex on Feb. 8.

Butterfly Bridge is a nonprofit organization that “offers a safe, child-friendly environment to children victimized by abuse or neglect as it carries out the mission to provide restoration and justice in their lives,” according to the organization’s website.

Three tables were lined with things attendees could bid on as part of a silent auction, and several other big-ticket items were part of a live auction that closed the event.

This year’s Flutter raised $40,000, which according to executive director Jana Zuelzke was $7,000 more than was raised last year.

“Thank you so much from the bottom of our hearts,” Zuelzke said to the crowd at the end of the event. “We have never done $35,000 before. I want to say thank you again, and we’ll see you next year.”

“It brings in a large percentage of our budget each year,” Zuelzke said. “It’s huge. What we made tonight is more than we expected. It feels phenomenal. We are just blown away that the people came out and supported us because they realize that this is happening right here. People don’t want to think about those bad things happening in our nice, great community, but the people here tonight realize it is happening and someone has to do something about it.”

The item that sold for the most was a lot of sod, which went for $1,000. The sod just barely edged out a weeklong trip to a condo in Destin, Florida, which sold for $900.

“I think it went wonderful,” Zuelzke said. “I saw a lot of new faces tonight. It was a great mix of old faces and new faces.”

Culinary students from Jemison High School provided the hors d’oeuvres for the event, which included such items as pigs in a blanket, sweet and sour meatballs, ham and cheese sliders, chicken salad croissants and different flavors of frosted cupcakes.

“They are awesome,” Zuelzke said. “They always are first class, the food is great, the presentation is great and the kids are so well mannered. They do such a great job.”

Some of the recently built storm shelters have run into questions regarding the cosmetic quality of the buildings. According to... read more