Tyler Jackson is the definition of a student-athlete, as he continues to excel in both academic and athletic disciplines.

Jackson was recently recognized as a recipient of the Bryant-Jordan award and followed it up by signing a football scholarship at Huntingdon College during a ceremony on Feb. 7.

“I’m just trying to soak it all in,” Jackson said.

Huntingdon has been a destination for several local football players over the years.

“I just really loved the campus there, and the coaches just really stood out from everybody else,” Jackson said.

According to Jackson, he has already spoken with Isabella alum Hunter Langston and is looking forward to having some familiar faces around.

Jackson is expected to play safety for the Hawks, a position he is very comfortable with after finishing second in the county with 86 tackles to go with three interceptions. 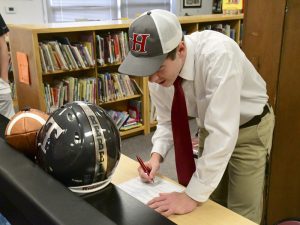 Jackson filled out the paperwork and will be given the opportunity to play football at the next level. (Photo by Anthony Richards)

He does not tend to shy away from contact and has the combination of physicality and coverage skills needed to play in the secondary.

“I like defense more than offense, because you get to make an impact on every play if you’re in the right position,” Jackson said.

As signing day approached, Jackson found himself looking back at all the various coaches that have helped him throughout the years.

He credited all those who took the time to help him become the man he is today both on and off the field.

Jackson’s path to the next level was not without some adversity, as he missed his entire sophomore football season due to an injury.

However, he continued to rehab and made the most of his opportunity the past two years since he got back on the field.

“I finally got back to myself this year,” Jackson said. “I thought to myself that ‘this can’t be it for me’ because I was having too much fun.”

One of the things that Jackson is looking forward to experiencing firsthand is the gameday atmosphere at Huntingdon.

“I’m just ready to see how it feels,” Jackson said. “I’m pumped up about it.”