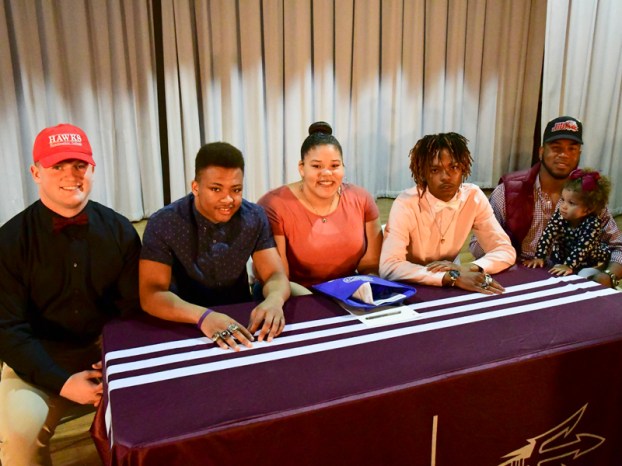 Tristen Thetford, Christin Brown, Jakavian Mckenzie and Timothy Bradley each signed to play football at the next level, while Tydasia Davis signed a basketball scholarship.

According to athletic director Brent Hubbert, the success of the five student-athletes sitting up on stage was formed by the choices they each made along the way.

“You never accomplish anything on your own,” Hubbert said. “It takes a community.”

The five seniors are part of a Maplesville senior class that only has roughly 30 students.

Brown signed to play at the FCS level with Jacksonville State University. Thetford will join other local talent from recent years that have called Huntingdon College home.

“I was nervous, because it has always been my childhood dream to play college football,” Thetford said. “The first thing I did when I got up this morning was to say ‘it’s signing day, it’s here.’”

Thetford visited Huntingdon twice and enjoyed his time on both trips.

“They [coaching staff] treated me like family,” Thetford said. “I felt at home down there.”

According to Thetford, he got with Hubbert and really started making a push to play in college at the start of his junior year.

Mckenzie and Bradley both chose Miles College in Fairfield. Bradley will enter the team with preferred walk-on status and plans to earn his way to an eventual scholarship.

“At the end of the season I didn’t have any offers, but we kept a look out and coach kept pushing,” Mckenzie said. “God came through and presented me with a scholarship.”

The fact that Mckenzie and Bradley are both going to Miles College can only help as they transition to college life.

According to Bradley, having someone familiar to take the journey with is something that he is looking forward to.

“The only thing that has been running through my mind is being thankful for the opportunity,” Mckenzie said. “My mother always told me to keep my head on straight and keep pushing, so that’s what I’m doing.”

The four football players finished with a high school record of 50-4.

Davis will continue her basketball career at Wallace Community College in Selma.

She always thought that she could have a future in basketball, primarily due to her usual size advantage in the post. She averaged 14 points, eight rebounds and two blocks per game during her senior season.

Despite always having a belief in her abilities, receiving a scholarship offer was still a humbling experience and something she is grateful for.

Family history can play an influential role in a person’s life. For JaNiya and Jasmyn White of Verbena, basketball is... read more