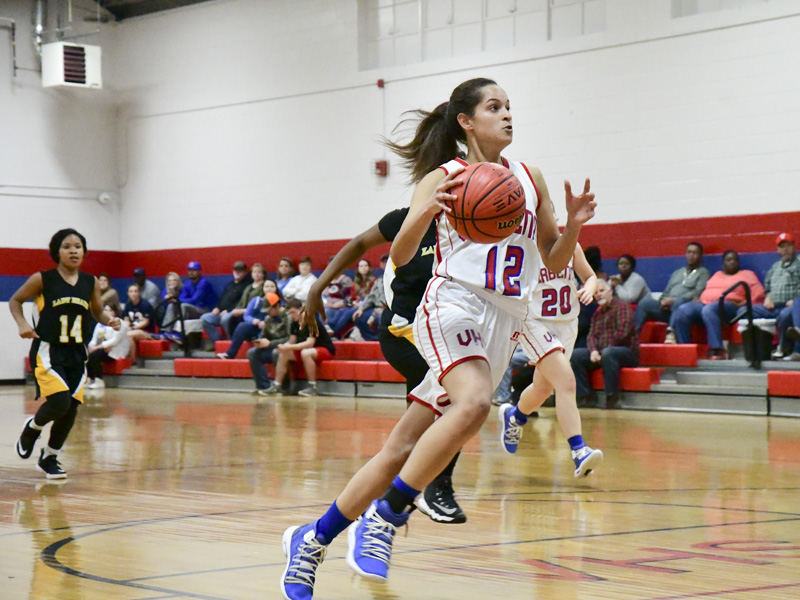 JaNiya White drives to the basket against Billingsley in the area semifinals on Feb. 4. (Photo by Anthony Richards)

The Verbena girls basketball team is one step away from an area championship following a 47-33 semifinal victory against Billingsley on Feb. 4.

The Red Devils stymied Billingsley early on defensively and outscored the Bears 19-3 in the first quarter.

“We pressured Billingsley right out of the gate, but then got out of it,” Verbena head coach David Sneed said. “My main concern tonight was just making it through the game and not getting anyone hurt, so we played a lot of people.”

Billingsley made a run of its own in the second quarter behind tenacious defense in the backcourt by sophomore Kristina Stromberg.

As a result, she was able to convert points off turnovers and finished with seven points on the night.

However, despite the Bears’ surge, Verbena stayed in control and led 28-16 at the halftime break after Natalie Easterling drained a 3-pointer from the right corner to beat the first half buzzer.

The multitude of scorers on the stat sheet was a bright spot for Sneed and something he looks to build on.

“Everybody constantly looks to the White sisters for all of our offense, and that’s good, but eventually we’re going to run into somebody that can matchup and somebody else is going to have to shoot the ball,” Sneed said. 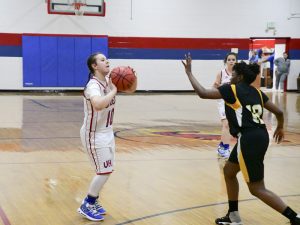 Dakota Adams of Verbena squares up for a shot from long range. (Photo by Anthony Richards)

With the win, Verbena clinches a playoff spot but has its sights set on even bigger goals.

The Red Devils will play Autaugaville for the third time this season in the Area 5-1A Championship on Feb. 7 at 6 p.m.

Verbena won both previous contests against Autaugaville. The Red Devils defeated the Eagles by 28 points at home on Jan. 24 and by 15-point margin on the road on Jan. 25.

“We have to create turnovers,” Sneed said. “If we’re playing half-court defense exclusively because they’re beating our press, then we’re in trouble. We have to play full-court and get those easy transition baskets.”

According to Sneed, he has full confidence in his team and their ability to execute the game plan.

The Red Devils have only lost one game at home this season, and they look to continue that as championship host.

Sneed encouraged the students and fans within the community to come out in full force and support their team as they go for a title.

According to Sneed, he had been informed that this was the first time that the Verbena girls basketball program had served as host of the area tournament.

“The fact that we’re the first seed and we can see a road to Montgomery in front of us is a pretty big deal,” Sneed said.