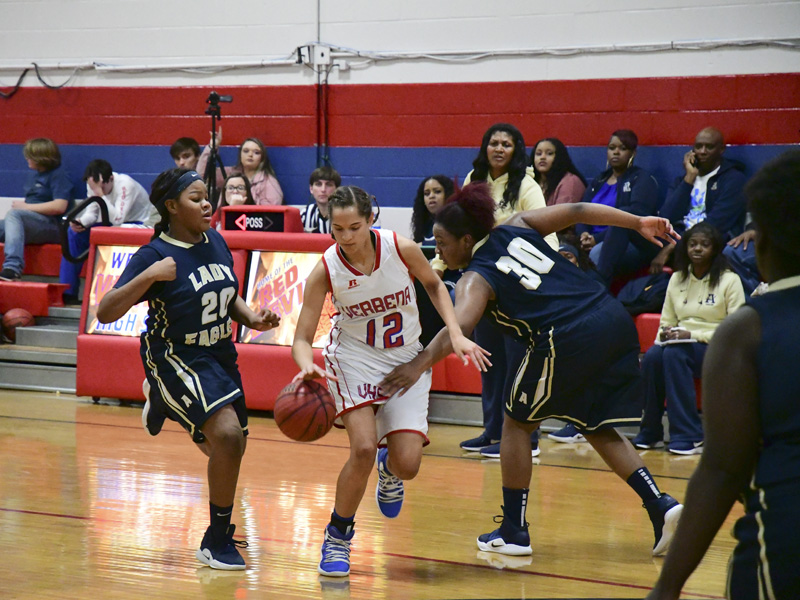 Senior JaNiya White erupted for 34 points to help Verbena to victory against Autaugaville on Jan. 24. (Photo by Anthony Richards)

The Verbena girls basketball team continued its current roll by winning its fifth-straight game with a 54-26 victory against Autaugaville (3-8, 3-1) on Jan. 24.

The win carried extra meaning because it was an area contest and improved the Red Devils’ record to 11-3 overall and 5-0 in area play.

JaNiya White had a monstrous night with 34 points to help lead the way.

“We had a lot of girls coming in off the bench tonight,” Verbena head coach David Sneed said. “They’ve all bought in to what JaNiya [White] is trying to do, and they really look for her.”

According to Sneed, what makes White’s performance even more impressive is that she has been “under the weather” for the past few days.

“What she did tonight was probably less than what she’s capable of,” Sneed said.

She continues to close in on 1,500 career points with each game that passes.

Jasmyn White also finished in double figures with 12 points on the night, while Madison Kelley added six points in the paint. 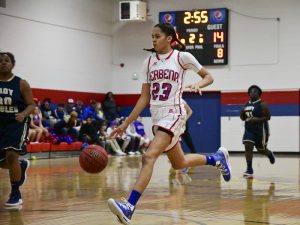 According to Sneed, he had the opportunity to go down and watch Autaugaville play Prattville Christian Academy, which helped him devise an effective defensive game plan.

“I saw that there were some opportunities to trap the corners and get them in transition,” Sneed said. “We lose a lot of jump balls and we’ve got to work on that, but when it comes to pressuring the ball at the top, we are all over it.”

One of the major catalysts defensively for Verbena is junior guard Amiiya Williams, who has a knack for harassing opposing ball-handlers with her active hands and tenacious effort.

“She stays low and stays after the ball,” Sneed said. “She has probably the quickest hands on the team. When she learns how to get her feet as quick as her hands, she’s going to just be unbelievable defensively speaking.”

Another part of the game plan was not having both White sisters on the court at the same time, especially to start the game.

“We didn’t want to start both of them in case Autaugaville got out here and were pretty evenly matched,” Sneed said. “We didn’t want to show them everything that we had. Once we saw that we could handle their pressure, we put them both on the floor.”