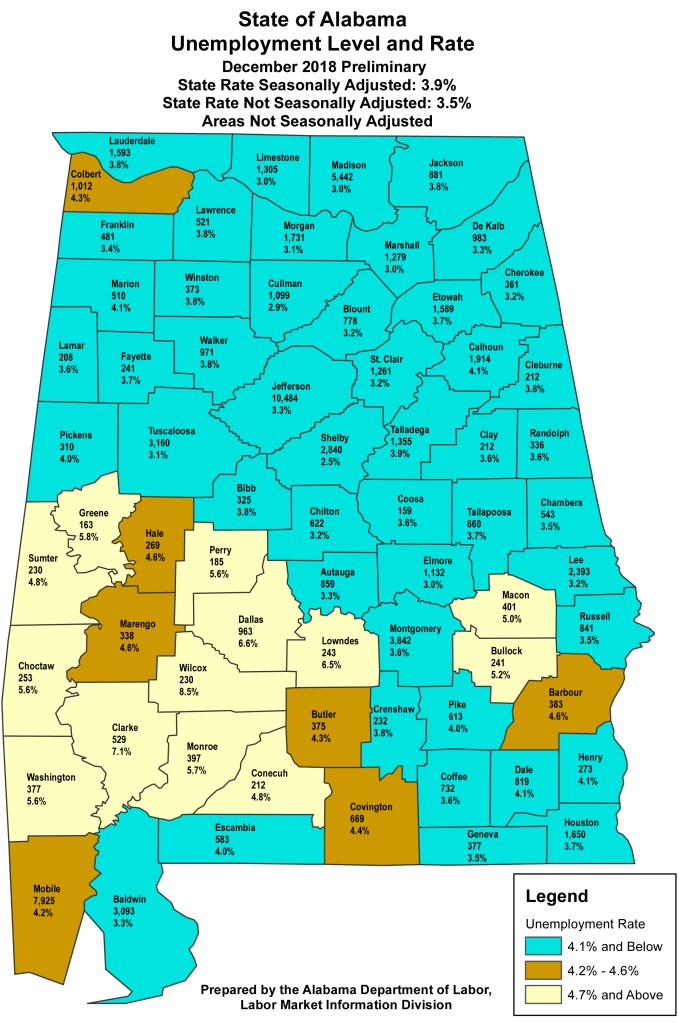 This map shows the unemployment rate during the month of December for each of the counties in Alabama. (CONTRIBUTED)

The rate of employment for both the state of Alabama and Chilton County has been one of the best on record, if not the best ever.

The unemployment rate for Chilton County was 3.2 percent in December, just slightly higher than the 3.1 percent posted a year ago.

The county averaged a 3.6 percent unemployment rate during 2018, which is the lowest it has been over the past six years.

County data goes back to 2013 on the Alabama Department of Labor website, labor.Alabama.gov, where all these figures are available.

November had the lowest rate of unemployment in the county for 2018 at 3.1 percent. June had the highest rate at 4.6 percent.

Both the civilian labor force (19,390) and the number of people employed in Chilton County (18,686) were the highest they have been during that time period.

The state of Alabama saw its lowest average unemployment rate since 2007, with both years coming in at 4.0 percent.

However, both the average civilian labor force for the state in 2018 (2,198,141) and the number of people employed (2,111,207) were higher than any number dating back to 1976, which is the extent of the available data on the Department of Labor website.

Alabama has just shy of a million more people in its workforce than it did in 1976.

Gov. Kay Ivey has been noted as saying that more people are working in Alabama than ever before, and the available data backs up that claim.

The statewide unemployment rate mirrored Chilton County in being the lowest in November at 3.4 percent in 2018, while June was again the highest at 4.9 percent.

Northern neighbor Shelby County once again had the lowest unemployment rate (2.5 percent) of the 67 counties in Alabama for the month of December.

Wilcox County was once again the highest at 8.5 percent.

Griffin sworn in as school superintendent