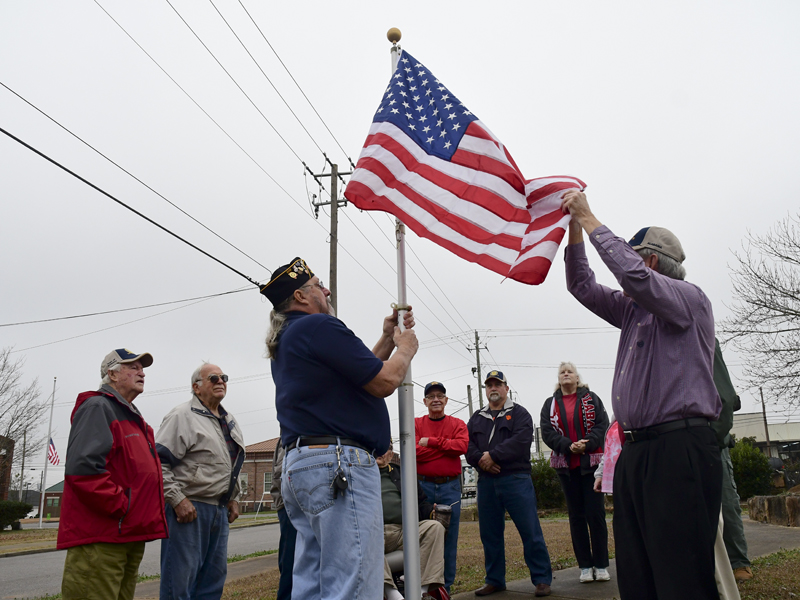 Members of American Legion Post 216 in Chilton County raise a new flag at the park across from the Chilton County Extension Office on Jan. 18. (Photo by Anthony Richards)

Members of American Legion Post 216 in Chilton County replaced a worn out American flag with a new one during a gathering at the park across from the Chilton County Extension Office on Jan. 18.

“We’re real patriotic,” member John Sansom said. “You almost have to be to be a member.”

This is the first time that the post, which was created a year ago, has swapped out a flag.

“When we get the opportunity we will do whatever we can to represent the county and our fellow veterans,” member Mike Smith said. “It’s about giving back.”

Clanton Mayor Billy Joe Driver was on hand and was presented with the new flag by Post Commander Steve McAnally before it was raised. 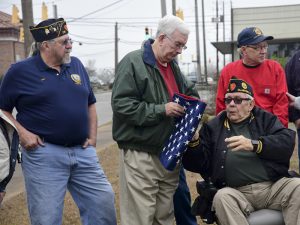 The post holds its meetings on the first Saturday of each month at Gap of the Mountain Volunteer Fire Department off of Lay Dam Road.

“It has been good for me, and gives me a chance to meet other veterans and find out what all we actually do for veterans and active duty members,” Smith said. “I don’t think we get the recognition for what we’ve done for our country and the sacrifices made. Hopefully, the younger generation can see what we’re doing and they can see what it’s all about.”

Smith retired from the Navy after 20 years of service. During that time he was part of seven deployments and spent a lot of time at sea.

According to Sansom, the American Legion is there to help any veteran in multiple ways, whether a veteran needs certain services to help with a disability or is in need of new glasses.

“We can line them up with contacts in Montgomery and send them to the right places,” Sansom said.

Sansom served in the Army for roughly four years. He believes those years prepared him for what life would be like and made him into the person he is today.

“It teaches discipline and how to respect other people,” Sansom said. “It comes in handy.”