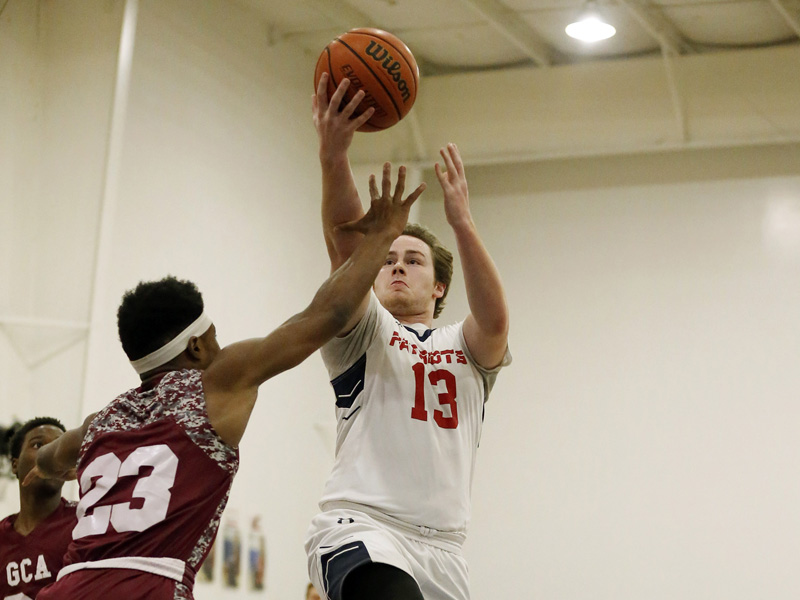 CCA's Thomas Gay drives to the basket for a layup. (Photo by Brandon Sumrall/Special)

A three from Marvin Johnson would put Gunn out in front, while Hines would later make it a 3-point Bulldogs lead.

The Gunn lead would grow to as many as six before a free throw from Bradley Smith would start an 8-0 Chilton Christian run that would see the Patriots end the first with a 13-10 lead.

The Patriot run would continue into the second period thanks to a starting basket by Smith and would extend to a 16-0 run before a basket from Hines for the Bulldogs would put a stop to the run, but not before Chilton had built a 21-10 lead.

A 3-pointer along with a free throw by Hines would cut the lead to seven, while a pair at the line from Jattarius Jones along with a basket from Pharrell Jackson would draw Gunn to within three.

Gay would answer with a pair from the line while Andrew Shirley and Smith would aid in extending the lead to nine. With a late basket from Gay, the Patriots would go to the locker room for the halftime break with a 33-22 lead.

Smith would get the second half started with a 3-point basket for the Patriots and would be followed by a pair of baskets from Gay.

A basket from Hines would proceed another three from Gay that would lead a 7-0 run for Chilton Christian to make the score 47-24.

A pair of baskets from JU Bice would extend the Chilton lead to 30, while a free throw from Jaron Baylor would make it a 29 point, 58-29 Patriots lead at the end of the third period.

A basket from Jones and a three from Jackson would get the Bulldogs off on the right track to start the final period, while Gay and Shirley would aid in getting the Patriots on the scoring path.

With the Patriots leading by 30 and the clock running, the Bulldogs would manage to cut into the Chilton Christian lead slightly. However, the Patriots would cruise down the stretch to a 75-51 win.

Gay put up 24 for the Patriots while Smith added 21. Jackson led Gunn with 17.