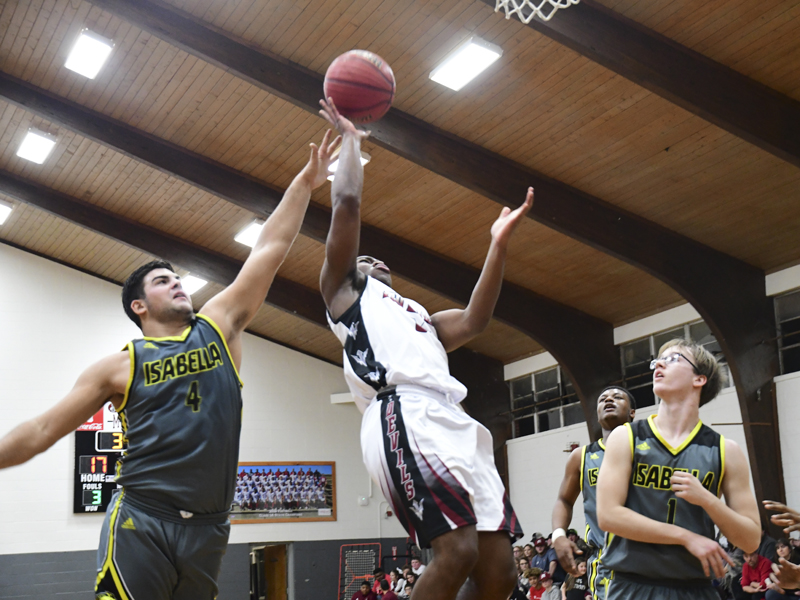 Ryan Morrow of Maplesville gets a shot off in the paint despite pressure from behind by Isabella’s Anthony Fjeldstad on Jan. 17. (Photo by Anthony Richards)

The Maplesville Red Devils completed a boys basketball season sweep of rival Isabella with a 65-46 victory at home on Jan. 17.

In both meetings the Maplesville offense did not disappoint and won the contests by an average of 21.5 points.

According to Maplesville sophomore Jackson Abbott, the team as a whole has a better understanding of head coach Stacy McGehee’s philosophy in his second season as head coach at MHS.

“We understand his language [terminology] and how to set up the offense,” Abbott said. “We’re working on our chemistry and our passing. We’re starting to get a feel for each other.”

Abbott was the primary contributor offensively for the Red Devils in the most recent affair with an explosion of a game-high 26 points.

He is known for his shooting prowess and his ability to knock down shots without much space needed.

However, he only hit two 3-pointers en route to his 26 points, which were mostly the result of driving to the basket and creating scoring opportunities around the rim.

“Last year I was just a shooter really, but now this year I feel like I’m building more of my game,” Abbott said. 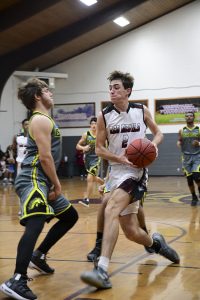 Maplesville’s Jackson Abbott drives to the basket. He finished with a game-high 26 points. (Photo by Anthony Richards)

The growth in Abbott’s game has also been noticed by his head coach.

“Since Christmas he’s been attacking the rim with a lot more confidence,” McGehee said. “It should help give him more spacing when shooting the three.”

Kalynn Hardy and Jakavian Mckenzie also chipped in offensively against Isabella with 10 and nine points respectively.

“It was pretty much a team effort of finding the open guy and not being selfish with the ball,” McGehee said.

The win over Isabella was not just important for the Red Devils because it came against a rival, but also evened up Maplesville’s area record at 2-2 and kept their hopes of hosting the area tournament alive.

“If we can beat Francis Marion and Holy Spirit, we can make it a three-way tie [for first place],” McGehee said. “Everything that we want to do is still in our grasp.”

Meanwhile, the Mustangs dropped to a record of 6-10 overall and 0-5 in area play.

Isabella senior Isaac Martin was stroking it from downtown with five 3-pointers for a total of 17 points on the night.