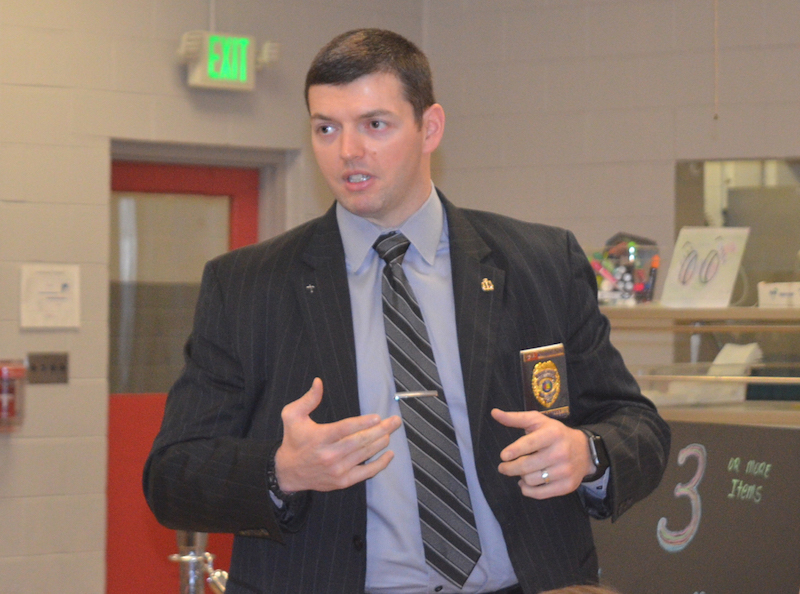 Maplesville High School congratulated students who earned all A’s on the second nine weeks reports card with a reception of punch and cookies on Jan. 18.

“We are happy that you achieved this goal,” Principal John Howard told the students have presenting each with a certificate of accomplishment.

“He is very knowledgeable in what he does … he is a person grounded in faith,” Howard said of Robinson during the high school presentation. “Someone that you need to look up to that you need to emulate in your transition to real life.”

Robinson encouraged students to stay focused, go hard and do not look back.

He acknowledged that some of the students may have already had to overcome things in life to make it on the all A honor roll and other areas of life. He encouraged students to keep making good choices.

Past close friends may take different paths, so it’s important to not look back, he said.

The speaker encouraged students not to follow friends who choose crime or a party lifestyle.

“There are going to be some people that are going to try to drag you down, get rid of them,” Robinson said. “Don’t let them pull you down.”

Robinson illustrated his point my telling a story of a builder who was ready to retire but was asked to build one more house.

Reluctantly, he agreed. Rather than focusing on the quality of the house, the builder focused on how to get the job done quickly.

“When his boss gets there, he says, ‘I’m finished. I’m retiring,’” Robinson said. “His boss says, ‘Wait a minute, here is the key to the house. These are your keys. This is your house as my gift to you.’ If only this guy had known, this whole time he was halfway doing this house that he was building his own house. How differently would he have done it?”

He told the students that every decision and every action the students make is building the house of their life.

“Whatever you are doing, don’t just get by,” Robinson said. “Do everything that you do to the best of your ability.”