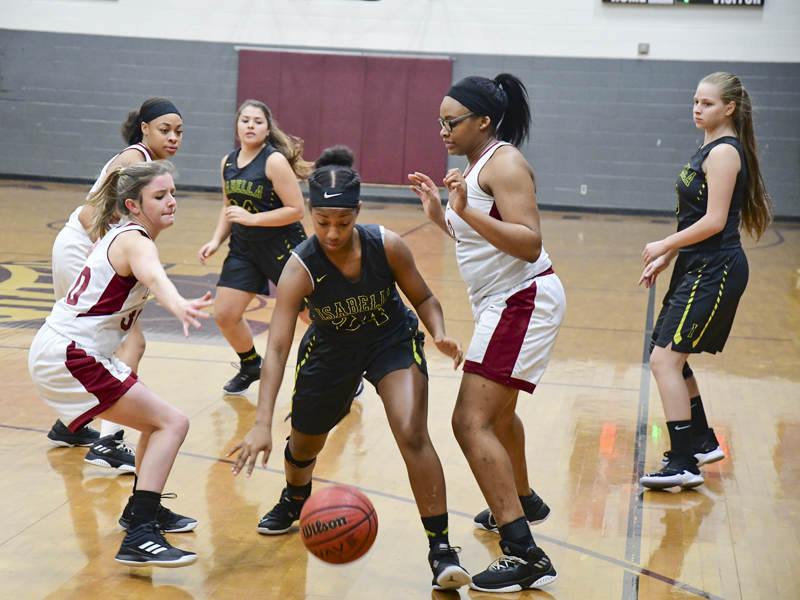 Isabella senior Kiara Ford splits a double-team on her way to the basket. She scored a game-high 19 points in the win over Maplesville on Jan. 17. (Photo by Anthony Richards)

Close games have been a common affair for the Isabella girls basketball team this season, and finishing strong in those games has not always been the case.

On a team full of youth, it was the seniors that stepped up when it counted most.

Noelle Fjeldstad knocked down three of four free throw attempts in the final 30 seconds to give Isabella the lead. Those shots proved to be the game-winning points.

“A couple of days ago in practice we were working on free throws tremendously,” Fjeldstad said. “One thing that I do is to envision the ball going in before it goes in. It works every time.”

Fjeldstad initally stepped to the free throw line with the game tied at 42 and 26 seconds left on the clock.

As she received the ball from the referee the Maplesville faithful amped up the volume in an attempt to apply some mental pressure, but Fjeldstad would have none of it. 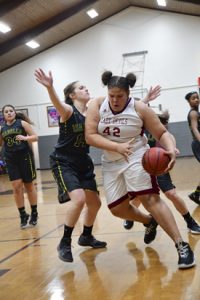 Senior Tydasia Davis (No. 42) of Maplesville works for positioning down low. (Photo by Anthony Richards)

“You just have to zone it out and worry about yourself,” Fjeldstad said. “Just breathe.”

She tallied 11 points on the night.

Six of Isabella’s eight losses have been by five points or less.

According to Isabella head coach Jared Day, the majority of those close losses were due to leaving points on the floor by missing more than 20 free throws.

The Mustangs missed 24 free throws against the Red Devils, but were still able to close the deal thanks to a maintained focus.

“We got down there [in fourth quarter], but we kept our composure,” Day said. “As bad as it goes you’ve got to keep plugging, and when it counts you’ve got to come through and make the shot. They didn’t let all the [previous] bad shots affect them, which is what you want to see.”

Another major contribution came from senior Kiara Ford, who finished with a game-high 19 points, 10 of which came in the second quarter as the Mustangs ended the first half on a 15-1 run and led 26-20 at the halftime break.