“This is the first time that Jemison’s band has ever done anything like this, and if we have [before], it has been years,” drum major Elijah Bittle said. “We just don’t really do that much stuff with that much publicity.”

JHS was one of about 10 high schools that took part in the parade and was part of the same lineup that included the University of Alabama’s Million Dollar Band and the Auburn University band.

“It was such an honor,” Braden LaRocca said.

According to Jemison Band Director Dakota Bromley, there was a call put out to schools in the state to apply for the parade, and JHS answered the call.

“We found out right before Christmas that we had gotten accepted to play,” Bromley said. “We had to do some extra rehearsals after school. It was good for the exposure [of the band program]. You only get to do it once every four years.”

The band took pride in the fact that they were not just representing themselves, but also the City of Jemison and Chilton County as a whole.

“We hope that we did a good job with that,” band member Emily English said. I had a really great time, especially with it being my senior year,” English said. “It was chilly [weather], but definitely worth it.”

There was a certain expectation heading into the event, but it still allowed for certain things to be a surprise.

“I did not expect the capital to be that big,” English said. “There were a lot more people than I expected to be there. It was awesome.”

Another first was the debut of Jemison’s new band uniforms. The parade was the first time that they had been worn during a performance. 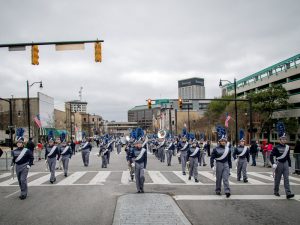 It seemed only fitting that the new attire was unveiled on such a momentous stage.

“It added another level of excitement,” Bromley said.

The band arrived a couple of hours early to warm up and get adjusted to the different atmosphere.

Gov. Ivey was sworn in around 10 a.m. and the parade followed the ceremony.

“It was a much bigger parade than we had ever done,” English said. “There was a huge difference from Dexter Avenue in front of the capital of Alabama [as opposed to] passing Chilton County peaches. It was really, really cool.”

The parade lasted about an hour, but the distance of the parade was shorter than the Peach Festival parade, which was a surprise to everyone involved.

“Unless you go to a college that does that, you’re never really going to get that experience again,” Bittle said.

English and LaRocca are both seniors, while Bittle is a junior. All three were excited that they had the opportunity to march at that grand level during their high school years.

“It’s a new part of the legacy that we’ll leave,” English said.

They have each seen the Jemison band program grow since they joined less than a handful of years ago.

“We went up almost two class sizes in just one year,” English said. “There’s so much talent and potential in the band right now. I can’t wait to see where it goes.”

The rest of Jemison’s band season includes competing in the state assessment for concert band in March, an invitation performance at a band festival in Tuscaloosa at the end of April and performing in New Orleans at the National World War II Museum at the beginning of May.

“I’m just so excited in seeing the momentum and being part of that growth,” Bittle said.