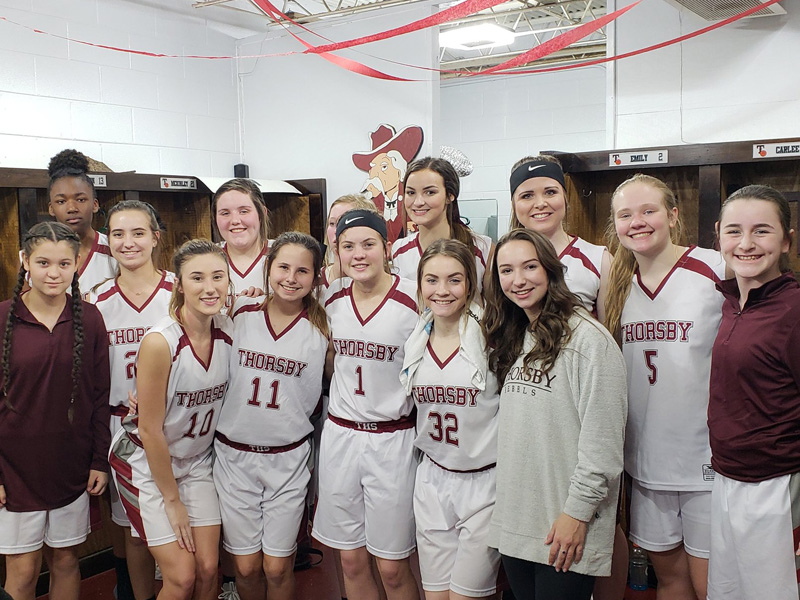 The Thorsby girls basketball team celebrates in the locker room after defeating Reeltown 42-35 on Jan. 14 to take over first place in Area 8-2A. (Contributed photo)

Thorsby basketball took a big step toward a possible area title with victories from both the boys and girls squads against Reeltown on Jan. 14.

It was the second-straight game that Christian Fortner finished with a triple-double. He had 37 points, 10 rebounds and 10 blocks.

Fortner hit 10 of 17 shots from the field and was one of four Thorsby players to make at least 50 percent of his attempts on the night.

Cole Farris also had a double figure outing with 10 points, while Xzavier Leverette had one of his more productive nights this season with eight points.

Of Leverette’s eight points, six came by way of the charity stripe. He was also a force on the glass en route to grabbing a team-high 13 rebounds.

Tyler Jackson and Cole Hight each chipped in six points apiece, as nine different Thorsby players made a basket in the contest.

Earlier in the evening the Thorsby girls also handled business against Reeltown with a close 42-35 victory.

The win puts THS in sole possession of first place in the area standings with an unblemished area record of 4-0.