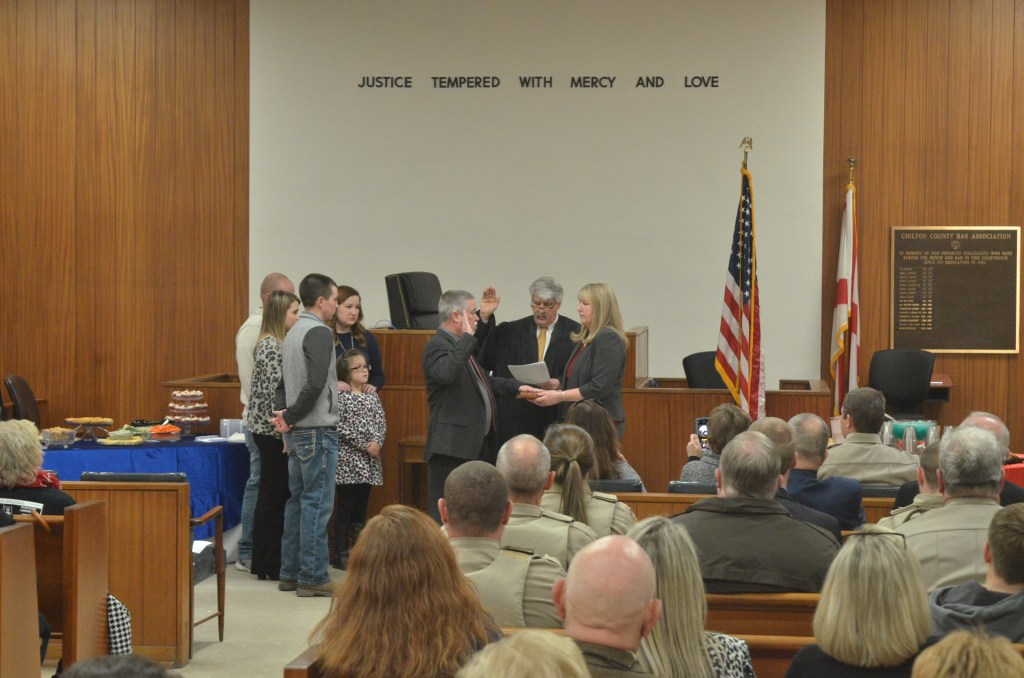 Judge Sibley Reynolds gives Sheriff John Shearon his Oath of Office during a ceremony at the Chilton County Courthouse on Jan. 14. (J.R. TIDWELL/ADVERTISER)

Chilton County Sheriff John Shearon was sworn into office for his second term during a ceremony at the Chilton County Courthouse on Jan. 14.

Judge Sibley Reynolds administered the Oath of Office to Shearon.

“I, John Shearon, do solemnly swear that I will support the Constitution of the United States and the Constitution of the state of Alabama so long as I remain a citizen thereof, that I will faithfully and honestly discharge the duties of the office of the sheriff of Chilton County, Alabama, upon which I am about to enter, to the best of my abilities, so help me God,” Shearon repeated as Reynolds spoke the oath.

Reynolds congratulated Shearon as the audience in the packed courtroom applauded.

Reynolds then had the deputies of the Chilton County Sheriff’s Office rise and swore them in with an Oath of Office as well. Shearon then addressed the crowd.

“It has been a short time since I was standing here four years ago, but it seems like it’s been 100 years so far,” he said. “I would like to thank Judge Reynolds for swearing me in today. Judge Reynolds has always meant a lot to us in law enforcement. He has always been there on our side to help over the years. I can’t thank him enough for the job he has done for the people of Chilton County.

“I’d like to thank God for getting me through these last four years and getting me back here. I dearly love this job. It’s tough a lot more time than it is easy, but I appreciate it and the people I serve. That means a lot to me. I’d like to thank my family, especially my wife. I haven’t seen a whole lot of her the last four years. She still stands behind me doing what I do.”

Shearon then thanked outgoing probate judge Bobby Martin for being an “inspiration” for him over the past 20 years, “especially the last four.”

“I have leaned on you, and I appreciate you very much, as well as our other elected officials,” Shearon said. “A lot of time we take these positions for granted, but these are very important jobs. I want to thank you (the voters) for getting me back into this position I am in.”

Shearon then addressed his deputies present at the ceremony.

“I have had a lot of water under the bridge in the last four years,” he said. “A lot of good things have happened, and a lot of bad things have happened. We have all kind of leaned on each other during the bad times and enjoyed the good times. I appreciate every one of you. We always try to go the extra mile in our jobs. Each time one of these deputies go out, they risk their life. They don’t know when they are going to come home to their families.”