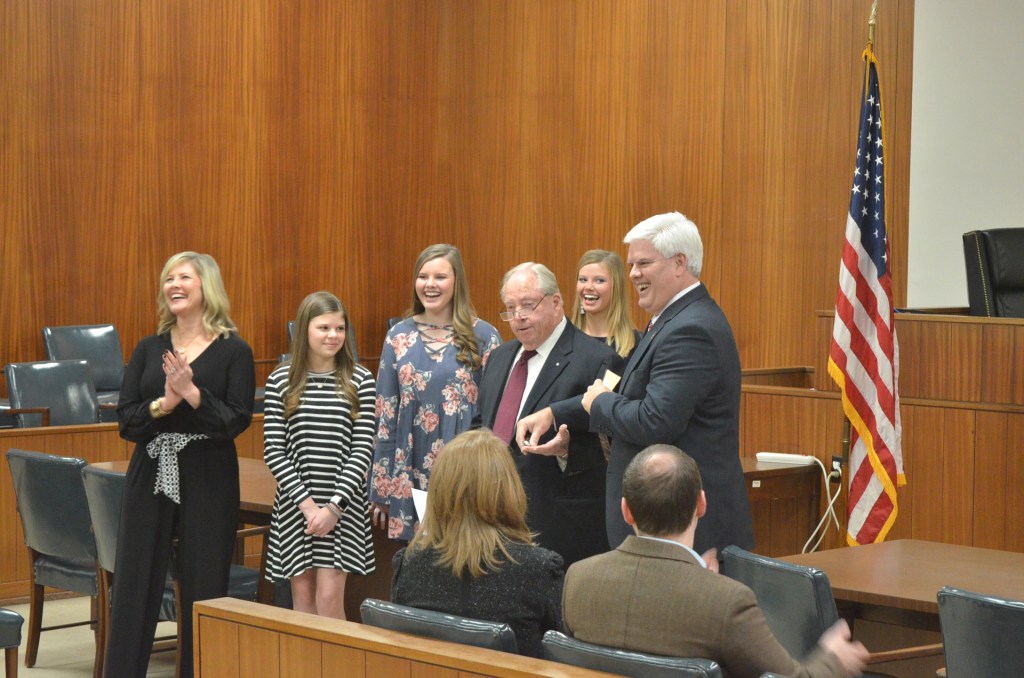 The end of an era came during a ceremony at the Chilton County Courthouse on Jan. 14, as newly elected probate judge Jason Calhoun took the Oath of Office.

He takes over the position from Bobby Martin, who has been probate judge of Chilton County for the past 30 years.

Martin said a few words about Calhoun before the oath was administered followed by Co-pastors Wes and Meghan Kelley of Clanton First United Methodist Church, where Calhoun and his family attend, the spoke a few words.

“Jason is a wonderful Christian man,” Wes Kelley said. “He is a man of faith, and so is his family. It’s our honor to be here today to pray over him, and we will continue to pray for him. We invite all of you to continue doing so in the years to come.”

Meghan Kelley then bid everyone in the courtroom bow their heads and prayed over Calhoun and his upcoming time in office.

Judge Chris Speaks administered the Oath of Office to Calhoun.

With his left hand on a Bible and his right hand raised, Calhoun repeated the words of the oath as Speaks bid him.

“I, Jason L. Calhoun, do solemnly swear that I will support the Constitution of the United States and the Constitution of the state of Alabama so long as I remain a citizen thereof, that I will faithfully and honestly discharge the duties of the office of the judge of probate upon which I am about to enter, to the best of my abilities, so help me God,” Calhoun repeated.

After the oath was finished, Calhoun introduced the members of his family and addressed the crowd that filled the courtroom.

“I wasn’t expecting this many people, but I appreciate you taking time out of your busy day, and I appreciate you coming down and spending this time with me and my family,” he said. “I am very honored to serve in this capacity. I have very large shoes to fill. I have been wearing three or four pairs of socks already trying to get used to trying to fill those shoes. I look forward to working for you and with a lot of you that are here today.”