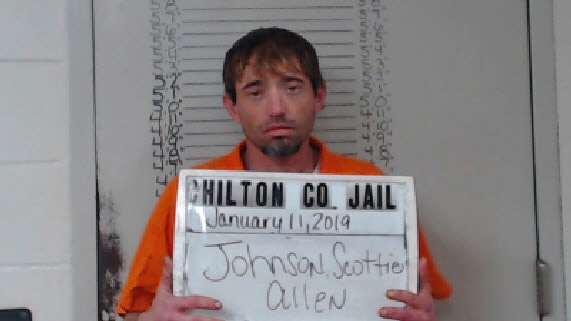 The man wanted for an alleged vehicle theft in Clanton was found and arrested after a short search on Jan. 11.

Scottie Allen Johnson, 35, was taken into custody at his residence after a search by local authorities led them to believe he was the subject wanted for stealing a vehicle with a child inside and ditching it in the Walmart parking lot before fleeing the scene on foot.

“At approximately 11:15 a.m., Chilton E911 received a call from a female stating that a subject had stolen her vehicle and that her infant was in the vehicle,” said Capt. David Clackley of Clanton Police Department in a release.

“The caller reported that she was in the Dollar Tree store at the time of the theft. While officers were responding to the area, another 911 call was received from an associate at Walmart stating that a white male subject had exited a vehicle near the associate parking area and had told her that there was a baby in the car as he briskly walked away. Responding officers diverted to Walmart and found the vehicle with the child inside and safe.”

The child was reunited with family a short time later.

Clanton police officers set up a perimeter, and Clanton schools were put on a soft lockdown due to their proximity to Walmart.

“Employees at Walmart were able to obtain video of the suspect entering the woods near the southwest corner of the building,” said Clackley.

“Clanton PD officers set a perimeter around the wooded area, and K9 officers responded. Clanton PD K9 officers were conducting training at the time of the call with K9 trainer Kevin Davis who responded to assist with the track. K9 Max and K9 Scout were deployed in the area of woods where the suspect entered and began to track.”

“K9 Scout recovered a pair of pants that were discarded by the suspect just prior to exiting the wooded area onto a nearby roadway,” Clackley said.

“Once the track was completed, it was determined that officers had made contact with the suspect walking in a nearby neighborhood but did not believe him to be the same subject due to the difference in the clothing he was wearing. After the discarded pants were found and K9 Scout tracked up to where the suspect had been seen, detectives responded to the subject’s residence to follow up.”

Authorities executed a search warrant on Johnson’s residence and found a wet pair of shoes that had a pattern matching the impressions found by the officers in the woods.

Clanton Police Chief Keith Maddox said during the search that his department believed they had identified the suspect from the video obtained by Walmart employees, and the shoes found at Johnson’s residence helped confirm he was the alleged culprit.

Johnson was arrested and booked into the Chilton County jail later that day on an auto theft charge. No kidnapping charge was listed.