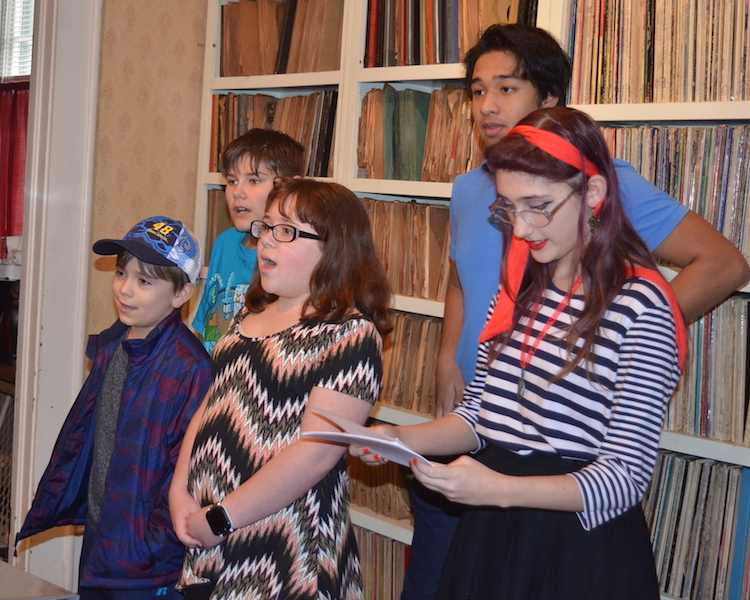 Young music lovers have come together as a jazz performance group under the leadership of Mike and Mary Schiermann.

These junior members of The Usual Suspects, known as The Innocent Bystanders, will be performing with the band on Feb. 2 at Senior Connection during the chili cook-off and health fair.

Curtis said he enjoyed music and had listened to the jazz radio program that Mike Schiermann produces.

“They invited me to be a part of their music program,” Curtis said. “It was a free opportunity to start singing, so I took it.”

While singing is the best part for him, Curtis said he has also enjoyed making new friends through the group.

As more students expressed interest, the group grew. Some of the members, such as Savannah Hayes and Tony To, had met the Schiermanns as a part of acting with the Central Alabama Performing Arts Guild. Mike Schiermann said they have also met students through the Creative Minds Classic Co-op home-school group.

“I have always loved music, and this was just a great opportunity,” Hayes said.

Mercy White said she wanted to join the group to have an opportunity to sing.

She invited her brother John to join.

To said he had heard about the jazz group while working with the Schiermanns on a theatrical production last summer. When they found out he liked jazz, they invited him to join The Innocent Bystanders.

“This group has always been performance driven,” Mike Schiermann said.

He said the group really started practicing together for the Jazz Festival in November 2018.

“We started out having each of these kids sing some solo things, then we realized that they had the ability to carry a harmony part,” Mike Schiermann said.

Curtis said his favorite songs thus far include “Choo Choo Cha’Boogie” and “Bill Bailey.” Curtis had a solo in “Bill Bailey” added to the score by Schiermann specifically for him. The verse is a rhyme about NASCAR and Jimmy Johnson.

“Choo Choo Cha’Boogie” will be one of the songs in the Feb. 2 performance.

Hayes said she enjoys “being with everybody and singing with the group.” “Bill Bailey” is her favorite so far because “it was really fun to work on.”

She is looking forward to performing “Java Jive” with the group on Feb. 2.

John White said this is his favorite song because it has some deeper notes and has a unique sound that is fun to sing.

“I enjoy hearing all of the harmony going on,” John White said of performing.

In addition to the songs the group is practicing, Mercy White is working on a solo piece called “Stepping Out” by Doris Day.

“My mom loves Doris Day, so I have kind of grown up around that artist,” Mercy White said. “It is such a fun song.”

She said she enjoys getting to know the band members during performances.

“A lot of people in the band are just fun,” White said.

To is working on a solo for “Same Old Saturday Night” by Frank Sinatra.

A typical practice includes warm ups and singing with pointers throughout from Mike Schiermann said.

“It has been so rewarding to work with these young people,” Mary Schiermann said. “They are so receptive and eager to participate in this kind of activity. It is a joyful experience for both Mike and I.”

“We are continuing are vocal tradition with a new generation,” Mike Schiermann said.