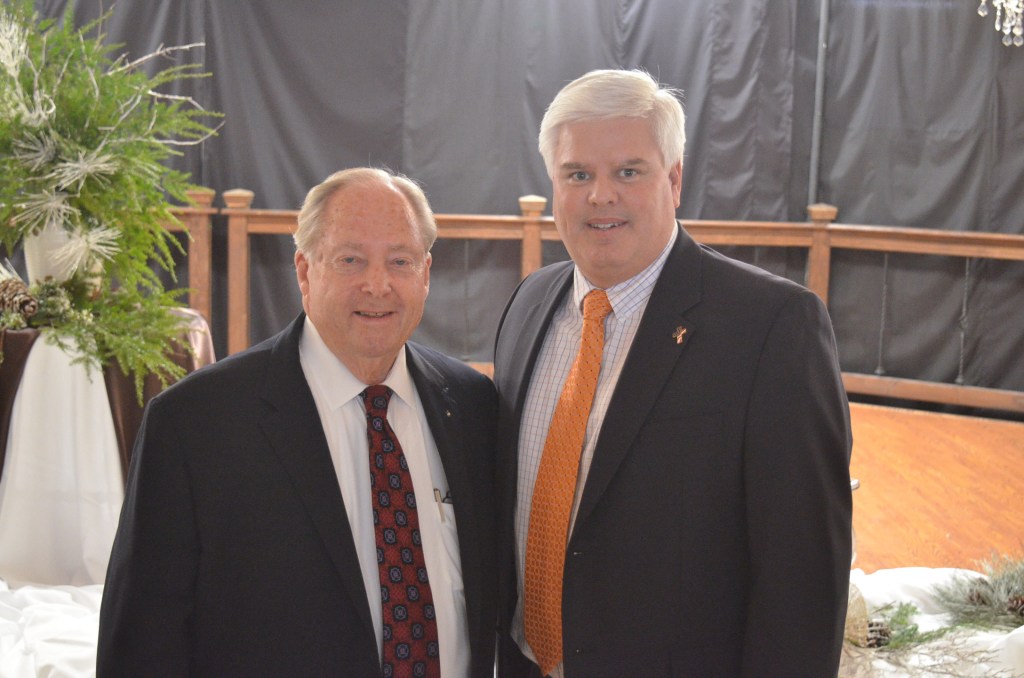 Long-time probate judge Bobby Martin stands with his successor, Jason Calhoun, during a reception held at Senior Connection on Jan. 13 in honor of Martin’s retirement from the position. (J.R. TIDWELL/ADVERTISER)

Thirty years is quite a long time. Many things can happen and change over the course of three decades.

One thing that has remained a constant over the last 30 years in Chilton County is having Bobby Martin as probate judge. He was sworn in January of 1989, and this month marks his 30th anniversary in the position.

In honor of his longstanding service to Chilton County, a reception was held for him at Senior Connection on Jan. 13.

Hundreds of people packed into the venue. According to Senior Connection director Vanessa McKinney, some people waited as long as an hour and a half to reach the front of the line in order to shake Martin’s hand and say a few words.

One of the first individuals to thank Martin for his years of service was Jason Calhoun, the man elected to fill Martin’s seat.

“I think that the county is losing a fantastic ambassador,” Calhoun said. “His whole life he has served our community, and he has done a fantastic job. I’m trying to get used to wearing four or five pairs of socks at a time in order to fill his shoes. I’m going to try my best. I couldn’t ask for a better mentor to help me with the transition. He has opened up his office and allowed me to pick his brain. Any question I have had, he has answered and elaborated on. The county will miss him dearly.”

After judge Chris Speaks swore Calhoun into office at the Chilton County Courthouse on Jan. 14, Martin literally handed Calhoun the keys to the probate office. Martin said that he would keep his phone on and answer any calls that Calhoun made to him.

Circuit judge Bill Lewis was also on hand to greet Martin at the reception on Jan. 13.

He said that Martin helped him adjust to the position when he was elected in 2016.

“He is the best there is,” Lewis said. “So much gets lost with the term politician these days, but Judge Martin is a public servant. He goes out of his way to help people in this community, and everybody knows him. He makes it a point to be involved and to know everybody. That has always meant a lot to me. When I got on the bench a few years back, he made sure that I knew everyone and was acclimated (to the office.) He’s a servant through and through, and that’s how people should approach public service.”

Clanton Mayor Billy Joe Driver, who worked with Martin on the Clanton City Council years ago, said that he and the outgoing probate judge had been friends “since birth it seems like.”

“He has done a good job, and everyone has turned out to show their appreciation,” Driver said.