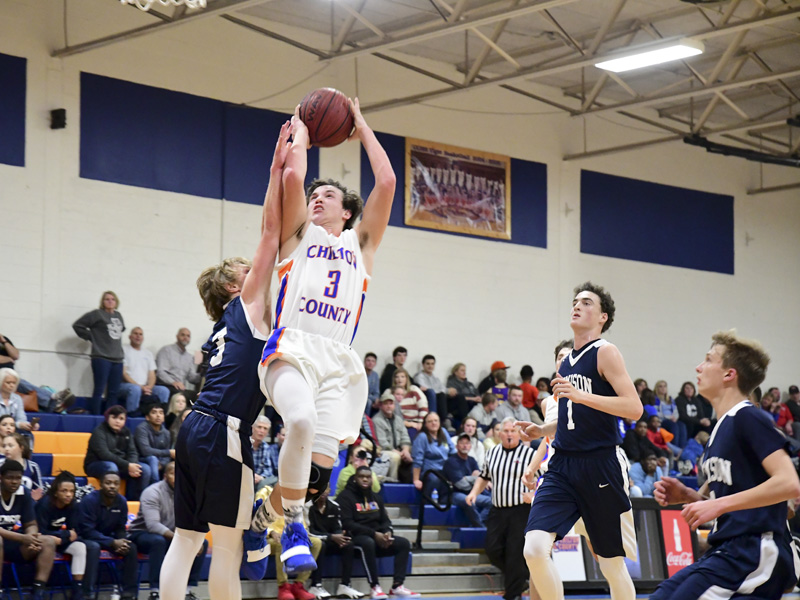 Dalton Patterson of CCHS is fouled on his way to the basket against Jemison on Jan. 11. He finished with a game-high 21 points. (Photo by Anthony Richards)

Chilton County boys basketball swept the season series against Jemison following a 73-43 victory over the Panthers on Jan. 11.

The CCHS home crowd basked in the glory of a 30-point win over their county rival.

Dalton Patterson had an outstanding offensive night for the Tigers with a game-high 21 points.

He was joined in double figures scoring by Parnell with 13 points and ShiKeem Laister who added 12 to his credit.

Patterson and Parnell combined for five 3-points in the contest, while Laister found the majority of his points around the rim.

“I’ve been in a slump, so it was nice to finally start hitting some shots,” Parnell said. “That boosted me and made the team feel good too, because they know what I’ve been going through.” 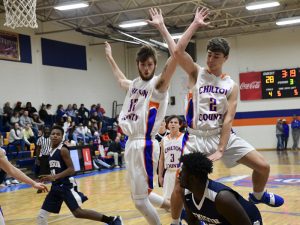 CCHS seniors Jack Parnell (No. 2) and Adam Jacks (No. 32) leap in anticipation of a shot. (Photo by Anthony Richards)

The loudest points of the night came when Laister threw down a thunderous dunk late in the game that sent reverberations throughout the packed crowd.

“I always try to get the crowd going, and the kids just love it,” Laister said.

According to Laister, facilitating the ball and getting his teammates involved in the offensive scheme is something that he has worked on this season on top of the highlight-reel plays that he has seemingly always provided.

“It can only go up from here,” Laister said. “When everything starts coming together, you can see what happens.”

It is well known that the Tigers lost a large group of seniors from last year’s squad. However, Parnell has continued to see improvement and has high hopes for the current roster through the remaining weeks of the season.

“We only had four returning guys on the team,” Parnell said. “It was really different, but I feel like we’ve finally caught our stride this year.”