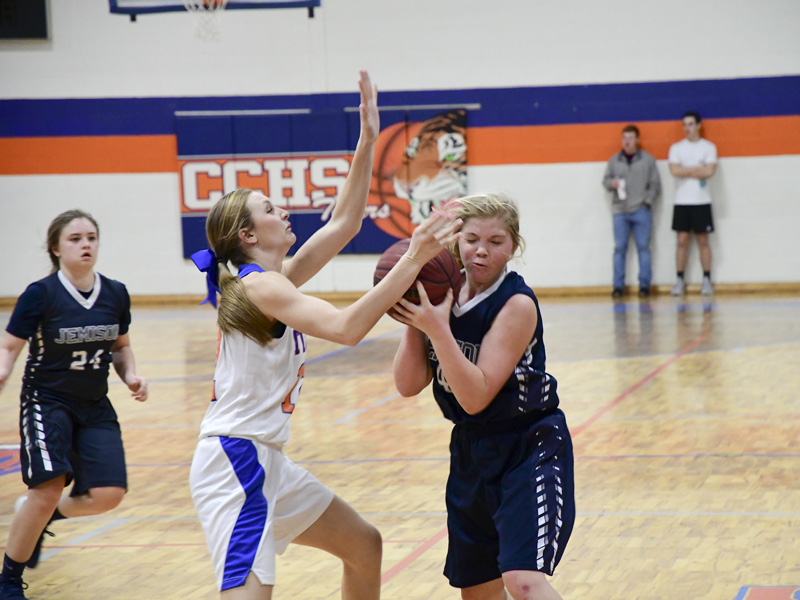 The Chilton County Lady Tigers earned their second area win of the season with a commanding 62-18 victory at home against county-rival Jemison on Jan. 11.

“In general a win has been good this season,” CCHS senior Adi Argent said. “We have a tough schedule, but that’s good because it pushes us to be the best that we can be.”

Argent and Kiara Steele both finished the game in double figures scoring with 22 and 13 points respectively.

It was a coming out party for Argent, who appeared back in form after dealing with an ankle injury in recent weeks.

“I was really down when it happened, because it was right before the county tournament,” Argent said. “Basketball is my favorite sport, and it was tough thinking about not being able to play. I’ve just kept pushing myself, knowing that it is my last season.” 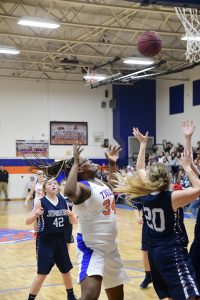 Players battle for a rebound. (Photo by Anthony Richards)

Not only did she lead all scorers with 22 points, but she also knocked down four shots from long range.

“I’ve been in a slump the last few games,” Argent said. “I haven’t been arching my shot, but tonight I was able to relax and have fun with it. It felt good to be back in the zone.”

According to Argent, the ankle injury forced her to adapt the way she played which included her shot.

It has taken some time to rediscover the shooting technique that has allowed her to garner All-Advertiser player of the year recognition in the past.

“I even noticed it in free throws because a big thing is using your legs in your shot, and I had gotten to where I was using all arms,” Argent said. “I had to just take some time at practice to reset.”

The win snapped a two-game losing streak for CCHS and was the first victory since the Lady Tigers captured the county championship on Dec. 21.

“We’ve had a lot of setbacks, but we haven’t let it slow us down,” Argent said. “We’re only getting batter and better, so I’m excited to see what else our team has.”