Calhoun, Shearon to be sworn in Jan. 14 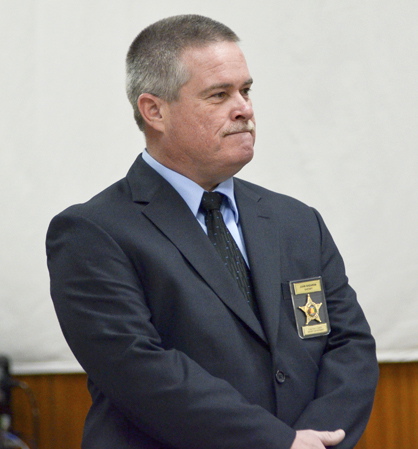 Sheriff John Shearon will be sworn in for his second term on Jan. 14. (FILE)

Newly-elected officials and those who have won another term will soon be sworn into office.

Jason Calhoun, who was elected probate judge after winning a Republican primary runoff, will be sworn into office by retiring probate judge Bobby Martin at 11 a.m. on Jan. 14 at the Chilton County Courthouse.

“I have been overwhelmed by the love and support that people have shown to me and my family,” Calhoun told The Clanton Advertiser after winning the runoff. “I am honored to be the next probate judge. I want to be able to help so many people.”

There will be a reception for Calhoun following the ceremony at Senior Connection until 1 p.m.

Martin has been probate judge of Chilton County for 30 years. He was sworn into office in 1989.

Martin served on the Clanton City Council for 16 years prior to becoming probate judge.

He also continues to work part time at Martin Funeral Home, his family’s business. He intends to maintain that work after his retirement as probate judge. His retirement is in obedience to state legislation that forbids people 70 or older from running for judge.

“Overall, it’s been quite a ride,” Martin told The Advertiser in May of 2018.

There will be a retirement celebration for Martin at Senior Connection on Jan. 13 from 1-3 p.m.

“It’s an honor to be elected by the people,” Shearon said. “It’s a big thing to know they trust you in the position and a real humbling experience.”

Shearon has been in law enforcement since May of 1999 when he joined the Chilton County Sheriff’s Office.

He worked there until 2008 when he took a position at Calera Police Department.

Shearon decided to run for sheriff in 2014.

“There were some things going on that I didn’t like,” he said. “I always liked helping people; that’s why I got into law enforcement. I am trying to make a difference. It’s a hard job, but it’s very rewarding.”

Shearon said he would love to have anyone there at the swearing in ceremony that would like to attend.