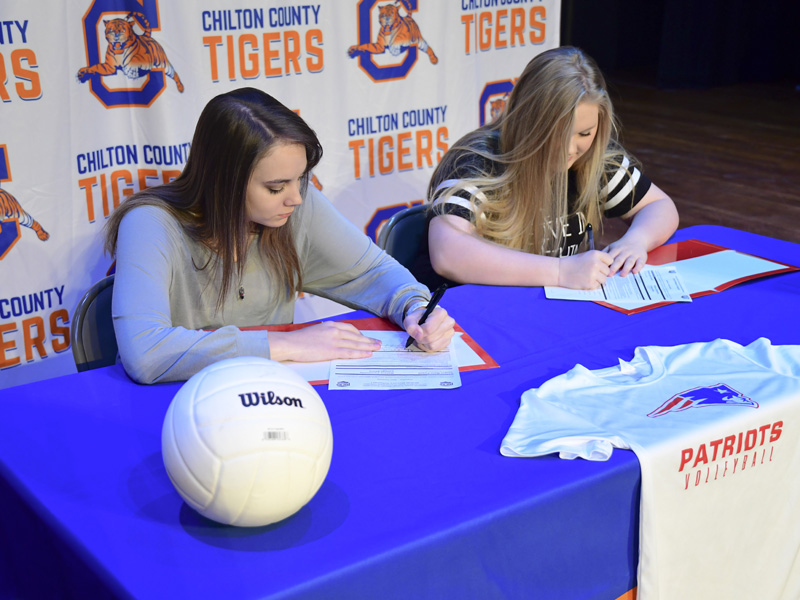 Abigail Powell and Brianna Connell signed to play volleyball at Wallace Community College in Selma during a ceremony on Jan. 10. (Photo by Anthony Richards)

Abigail Powell and Brianna Connell of Chilton County High School have been teammates since eighth grade and will be for a little longer after both signed to play volleyball at Wallace Community College in Selma.

The dream of playing at the college level began to morph into a reality during their senior seasons, as they began to increase their talks with Glen Graham, who is an assistant coach on the staff.

Connell and Powell have been able to get to know Graham, who is also the volleyball head coach at Isabella High School, during the recruiting process.

According to Powell, it has been interesting to develop a different relationship with him instead of viewing him as someone on the opposing sideline.

Powell is a setter and Connell is a libero. Those are positions that they have played throughout their high school careers and have become very comfortable with during that time.

“We’ve come a long way from how we used to play,” Powell chuckled. “Back then [eighth grade] I had no idea what I was doing.”

They are both anxious to get to the next level and appear ready to embrace the challenges that await them. 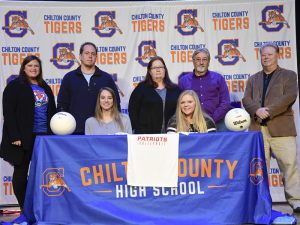 Both players were joined by their families on stage after signing to play at the next level. (Photo by Anthony Richards)

“I’m excited and eager,” Connell said. “It’s going to be a lot more fast-paced and intense.”

It can take time to grow into a leadership role, which is something that both Connell and Powell were able to do in recent years.

According to Connell, developing an understanding of the importance of practice is an important step in becoming a leader.

“At first you dread practice, but then you get to the point where you are eager for it and enjoy it,” Connell said.

Powell enjoys playing setter because she always gets to touch the ball and a lot of the offense funnels through her.

“Getting to watch people hit the ball that I set is really cool,” Powell said.

Being a libero means having a willingness to hit the floor at any moment to get a dig. Connell’s mindset of not shying away from getting down and dirty allowed her to be a perfect fit for the job.

“You’ve got to get that ball,” Connell said. “You can’t let it hit the ground.”

Both players were influential in helping CCHS defeat Isabella and win the county volleyball tournament for the first time in quite a while.

It was a big deal for the program and a moment that they will always remember and cherish when looking back at their senior year.