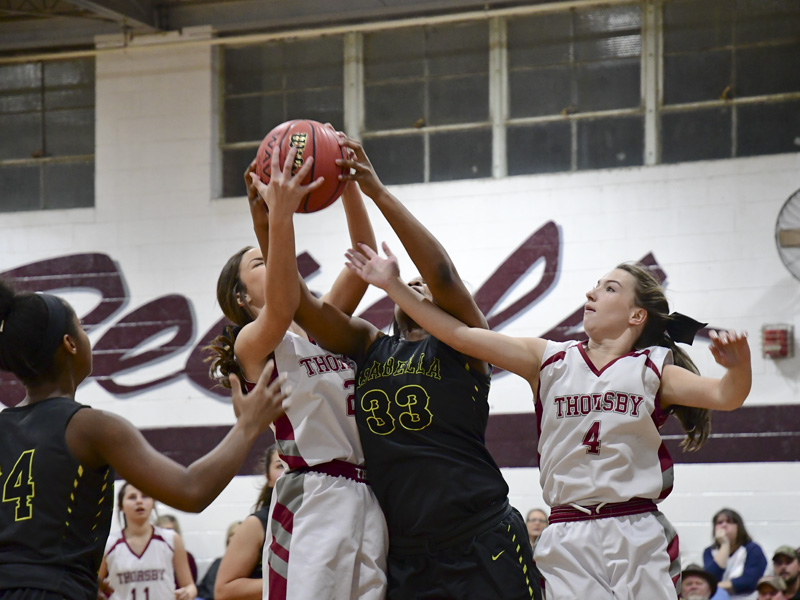 Thorsby’s Emily Jones (No. 2) and Lindsey Wood (No. 4) fight for a rebound with Mercedes Simon (No. 33) of Isabella during a game on Jan. 4. (Photo by Anthony Richards)

After a slow start Thorsby’s offense eventually found its groove en route to a 36-22 girls basketball win at home against Isabella on Jan. 4.

Both teams struggled to put the ball in the hoop early on, as the Rebels led the Mustangs 5-3 at the end of the first quarter.

Thorsby committed 10 fouls in the first quarter, which forced head coach Kris Wood into a balancing act with players in early foul trouble.

Senior Destinee Scott provided valuable minutes off the bench and looked comfortable in her decision-making with the ball in her hands. She did not score, but her presence on the court was felt.

According to Thorsby freshman Cameron Lockhart, one of the adjustments made to counteract the early fouls was a switch from a man-to-man defense to zone at the start of the second half.

“We just had to calm down,” Lockhart said. “Being in zone helped a lot.” 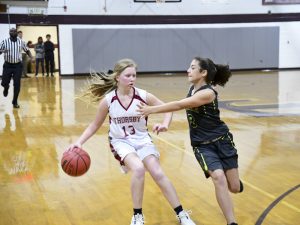 The game remained within single digits until Thorsby outscored Isabella 10-2 in the fourth quarter to open up the margin. Senior Hannah Smith scored six of those points.

According to Lockhart, Smith has always been willing to share advice about how she approaches each game from the guard position.

It was a productive night offensively for Carlee Wyatt and Lockhart. Wyatt led all scorers with 15 points, while Lockhart added 10 of her own.

Lockhart is only a freshman but provided a spark with her hustle plays on the court.

“I’ve gotten a lot more comfortable with the ball and dribbling,” Lockhart said. “I try to run the floor and get open.”

Senior Kiara Ford led Isabella with 7 points in the contest.

With the win, Thorsby improved to a record of 7-3, while Isabella dropped to 2-6 on the season.