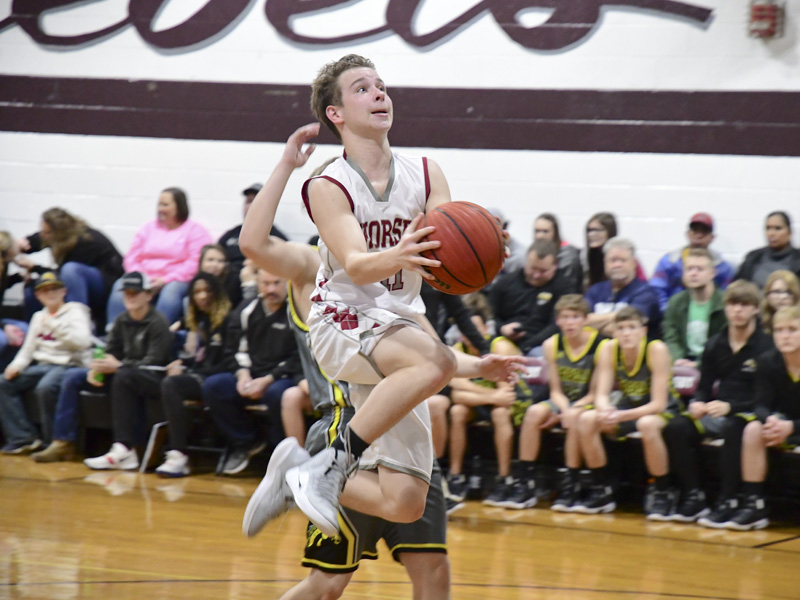 John Ryan Wood of Thorsby drives to the basket against Isabella during a basketball game on Jan. 4. He finished with 10 points on the night. (Photo by Anthony Richards)

Thorsby boys basketball increased its winning streak to 11 games following a 71-36 victory over Isabella in front of a packed house on Jan. 4.

“We’ve still got room for improvement, but they’re playing with a lot of confidence,” Thorsby head coach Tim Fortner said.

The Mustangs led 7-6 early on, but the Rebels grabbed control of the game shortly after and continued to turn up the wick the remainder of the contest.

Christian Fortner led the way with a 14-point effort that came one night after surpassing 2,000 career points against Westminster-Oak Mountain.

“He started on the varsity in the eighth grade, and just about every year he has been the leading scorer on the team,” Tim Fortner said. “He started off [career] averaging maybe 11 or 12 points and now was at 26 coming into the game.”

John Ryan Wood and Kobe Davis each finished with 10 points on the night. 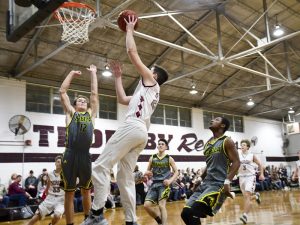 Thorsby’s Cole Farris scores two of his nine points in the game. (Photo by Anthony Richards)

Davis provided energy off the bench and was on target from beyond the arc. He also led the team with three steals.

“We try to play the same way, regardless of who is in the game,” Tim Fortner said.

According to Davis, he understands the role he plays coming off the bench and continues to try make the most of the minutes that he gets.

“We had good ball movement,” Davis said. “We’re all just really good friends, and we just click on the court.”

Sawyer Sellers was the only player on the bench that did not see action, as he continues to recover from an ankle injury.

“We had to get used to different lineups with Sawyer out,” Tim Fortner said. “They’ve [team] adjusted to the new rotation and who I’m bringing off the bench.”

Martin and Kendall Reeves each knocked down a pair of 3-pointers for the Mustangs.