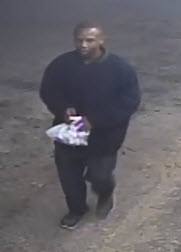 The Clanton Police Department is searching for the identity and whereabouts of a man who allegedly robbed a local convenience store of several packs of cigarettes on the night of Christmas Eve.

CPD posted a video and photo of the alleged thief that was captured by a security camera at the store.

While the post did not contain the name of the store, one local resident said the incident occurred at Town and Kountry, which is located at 1707 Seventh St. S in Clanton.

“CPD needs your help in identifying this suspect who threatened a clerk with a firearm and took a large quantity of cigarettes at a local store,” said a post made by CPD on social media. “There are several clips of slow motion at the end of the video clip. If you know the suspect or can identify him, please contact CPD Detective Cameron Bates or message (the CPD Facebook) page.”

According to Capt. David Clackley, the suspect had yet to be identified or arrested as of the morning of Dec. 27.

According to the incident report, the suspect was seen driving what appeared to be a gold van behind the store. The suspect, a black male approximately 5 feet, 6 inches tall, was “wearing a navy blue sweatshirt with a gray undershirt, dark colored blue jeans and gray and white shoes.” The suspect was described as bald with a beard.

“The subject came in the store and asked for four packs of cigarettes,” said the report. “When the clerk put them on the counter, the offender stated he didn’t have any money, and he would shoot the clerk if he did not give them to him. The subject had his right hand under his shirt in a manner that he was holding a pistol. The clerk gave him the cigarettes, and (the suspect) asked for a bag to put them in. The subject then walked out of the door and told the clerk not to call anyone or he (the suspect) would shoot him.”

Clackley said the suspect entered the store around 6:30 p.m. on Christmas Eve.