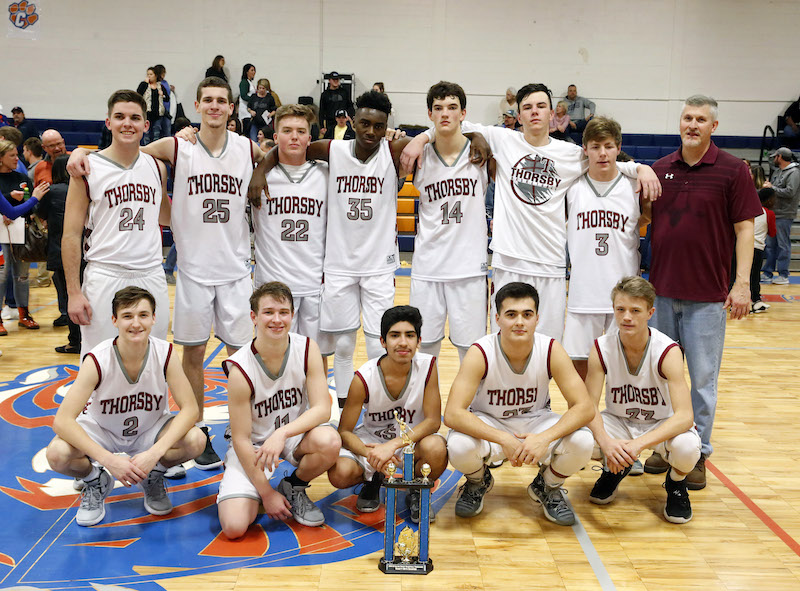 By Brandon Sumrall/Special to the Advertiser

For the past two years, the Chilton County Tigers have swept all three divisions of the county basketball tournament.

The Tigers entered the final round on Dec. 21 looking to make it three in a row, having already clinched a third consecutive B-Team title on Dec. 20

With a 71-46 win for the Lady Tigers over the Verbena Red Devils, the Tigers would move one step closer to another tournament sweep. However, the standing room only crowd would witness history of another form as the Thorsby Rebels varsity boys knocked off the Tigers for their first county tournament championship since 1978.

The Tigers would jump out to an early 6-2 lead. Christian Fortner would draw the Rebels to within two, but a 3-pointer from Dalton Patterson would make it a 5-point Chilton lead.

A pair from the line by Fortner would be followed by one from ShiKeem Laister, while a trey from Tucker Patterson would make it a 1-point game.

A pair from the line by Tyler Jackson would later knot the score at 16, while Sawyer Sellers would follow to give Thorsby their first lead of the game. With a basket from Cole Hight and a 3-pointer from Justin Liveoak, the Rebels would end the first with a 20-19 lead.

Jack Parnell would give the Tigers the lead back to start the second, but he would be answered by a basket from Cole Farris.

Laister would tie the game at 23, while Keyuntay Kine would sink four from the line to make it a 27-23 Chilton lead.

Laister and Parnell would combine to extend the Tiger lead to seven, while a basket from Fortner and a 3-pointer from John Wood would cut the lead to three. A late basket from Kine would see the first half come to an end with the Tigers leading 33-28.

The Chilton lead would remain intact through the early moments of the third period before eight consecutive points by Fortner would swing the lead in favor of the Rebels by one.

Liveoak would give the Tigers the lead back on a 3-point basket, but Wood would answer him right away with a matching trey.

Four more by Fortner along with another 3-pointer from Wood would see the Rebels take their largest lead of the game at 52-45.

The Tigers answered with a couple of baskets of their own during the closing seconds to make it a 56-52 Thorsby lead at the end of the third.

The JaKobi Albert show would get the fourth period started, as the Chilton County freshman would knock down a pair of 3-pointers to put the Tigers back out in front by two.

A pair of free throws by Laister would extend the Chilton lead to four. However, a trey from Fortner along with one from the line from the Thorsby senior would make it a 1-point Rebel lead.

The two teams would swap that lead on several occasions during the closing moments, with the Rebels holding the advantage at 68-67 with just 12 seconds remaining.

With 37 points already to his credit, it would be the clutch free throw shooting of Fortner during the final seconds that would propel the Rebels over the top to a 72-67 victory.

“I just focused on my basics, we work on it everyday in practice,” said Fortner. “Those free throws were no different than the ones I shot at the beginning of the game.”

Becoming county tournament champions, while picking up the schools first tournament title in more than 40 years, was nothing short of a dream come true.

“It’s crazy,” said Fortner. “Ever since I was in seventh grade, I have dreamt of being county tournament champions. We never really had a good opportunity. Teams we faced in the past where just better than us. This year, we came in with a good chance and we made the most of it and went out and won it.”

“It’s awesome,” said head coach Tim Fortner. “I couldn’t ask for anything more. (Christian) played his guts out, had a huge game and made clutch shots all night long and played great defense. Our entire team played so hard, and I couldn’t be prouder of every single one of them. All night long we got down, we got up and they just kept getting after it. They did exactly what I asked them to do, and we came away with a huge win.”

Parnell and Laister each ended the night with 16 for the Tigers.