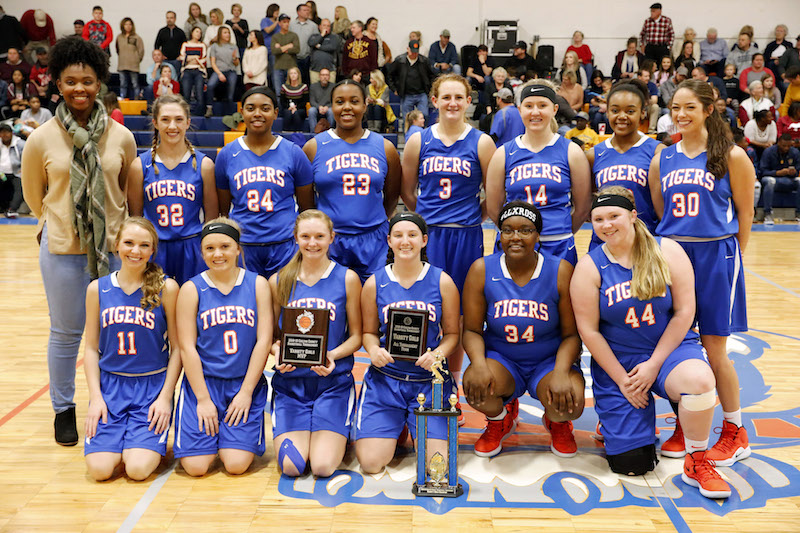 By BRANDON SUMRALL/Special to the Advertiser

The Chilton County Lady Tigers varsity basketball team earned a 71-46 win over the Verbena Red Devils to win the county title on Dec. 21.

The varsity girls would waste no time setting a torrid pace for the night, as the Tigers and Red Devils would match each other basket for basket through the early minutes.

Five consecutive points by Adison Argent would swing the lead in favor of the Tigers and would kick off a 13-0 Chilton run that would finally be brought to an end on a 3-pointer from Janiya White. Four more from Jasmyn White and a pair from the line from sister Janiya, would see the Red Devils end the first trailing Chilton County 24-15.

Hot shooting by the Tigers would continue into the second period, as Hallie Arnold and Holley McKinnon would combine for five to start the period.

Four straight from Janiya White would pull the Red Devils to within 11, but she be answered by Arnold and McKinnon again combining for five.

Argent and Kiara Steele would extend the Tiger lead to 20, while yet another trey from McKinnon would see Chilton end the first half shooting 67 percent from the floor and sporting a 49-26 advantage.

Steele would start the third for the Tigers by extending the Chilton lead to 25, while another 3-pointer from McKinnon would later make it a 32-point Tiger lead.

Six consecutive points by Argent would push the Tiger lead to 38, while Janiya White and Maniyah Nunn aided in the Red Devils lessoning the deficit.

The Tigers would hold a 69-38 lead as the game moved into its final period.

With a hot clock during the period and the Tigers choosing to sub deep into their bench, eight points on the period would aid in lessoning the Red Devil deficit.

However, the Lady Tigers would cruise through the period to a 71-46 win and the title of county tournament champion.