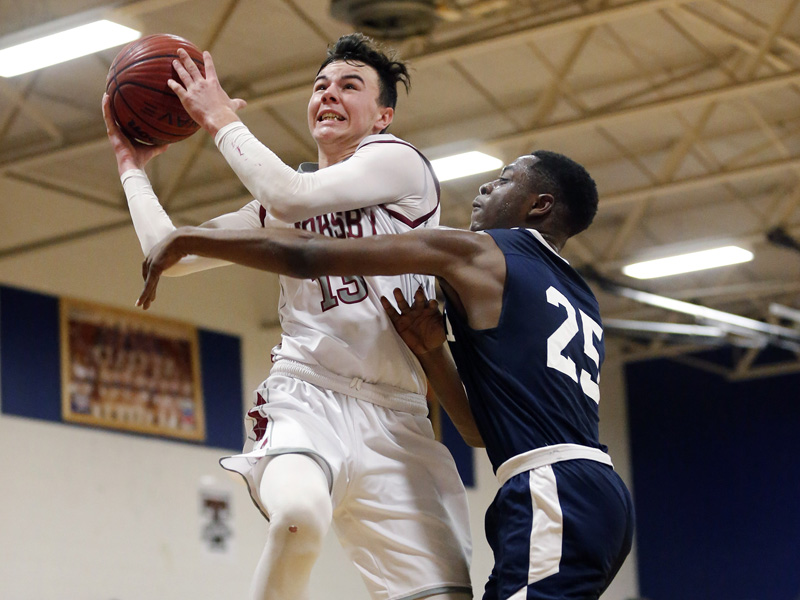 Tucker Patterson (No. 13) of Thorsby drives to the basket against Jemison’s (No. 25) Jarred Taylor during the semifinals of the county tournament on Dec. 20. (Photo by Brandon Sumrall/Special)

The Thorsby Rebels shook off some early rust and won convincingly, 68-39, against Jemison in the boys semifinal of the county basketball tournament on Dec. 20.

Christian Fortner led all scorers with 27 points and got oh so close to a double-double with eight rebounds.

Despite the early struggles shooting from the field, the Rebels led 11-10 after Cole Hight stole the ball and hit a floater in the lane to beat the first quarter buzzer.

Hight finished with 10 points in the game, including a pair of 3-pointers.

“We hadn’t played in a couple of weeks and I think that had something to do with the lack of energy [early],” Thorsby senior John Ryan Wood said.

However, once the Rebels’ offense got going, there was no looking back. Thorsby outscored Jemison 57-29 over the final three quarters.

“When we’re clicking, it [offense] can go,” Wood said. “That’s how we like to play every game.” 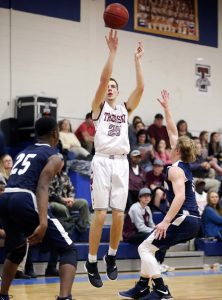 Thorsby’s Christian Fortner shoots a 3-pointer. He finished with a game-high 27 points. (Photo by Brandon Sumrall/Special)

Nine different Thorsby players scored points on the night. Junior Johnny Castro came off the bench and got on the score sheet by scoring the game’s final bucket, which led to a loud roar from the Thorsby faithful.

Tucker Patterson and Sawyer Sellers did a nice job of using their size around the rim. Patterson finished with nine points, while Sellers scored seven points to go with eight rebounds.

“We’ve got a height advantage on most teams,” Patterson said. “We’ve just got to do our job.”

Thorsby was set to square off against Chilton County High School in the boys championship on Dec. 21. The game followed conclusion of the girls title game that began at 5 p.m. and 20 minutes after the county football presentations.

According to Patterson, it would be a big deal for the school and basketball program to follow up winning an area title last year with a county tournament title.

“We want to win a county championship,” Wood said. “That’s a pretty big deal around Thorsby, because I don’t think they’ve ever done that before.”