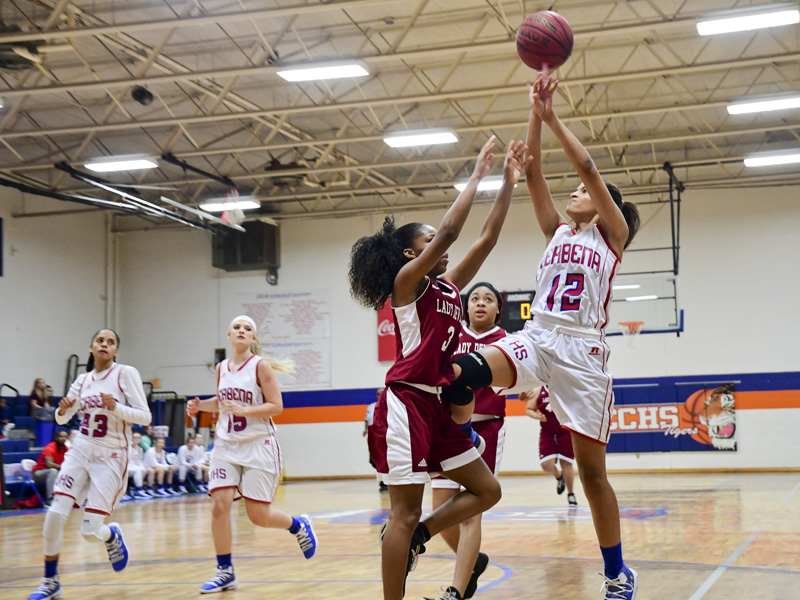 Verbena’s JaNiya White (No. 12) shoots over Shaveon Dunlap (No. 3) of Maplesville during the semifinals of the county tournament on Dec. 19. (Photo by Anthony Richards)

The Verbena girls basketball team will play for a county title after defeating Maplesville 52-31 during the semifinals on Dec. 19.

After a tight first quarter that Verbena led by five points, VHS was able to extend the lead 29-11 at halftime.

Maplesville only mustered three points in the second quarter, and it proved to be an uphill battle the rest of the game.

The struggles offensively for Maplesville were due in large part to the defensive scheme that Verbena employed in the post against Tydasia Davis.

“We scouted Tydasia [Davis] and knew that if we could hold her down, that we would have a good chance at winning,” Verbena head coach David Sneed said.

According to Sneed, the Red Devils practiced for two hours the day before and the primary focus was working on how to defend Davis.

“We rotated so many [players] in and got her [Davis] in foul trouble early,” Sneed said.

Some of the players tasked with guarding Davis throughout the night included Hailey Kirkland, Isabella McDaniel and Natalie Easterling.

“They [defenders] knew exactly what they needed to do,” Sneed said.

Davis still managed to score 21 points but had to work hard to get those buckets.

Verbena’s JaNiya White led all scorers with 28 points, 22 of which came in the first half. 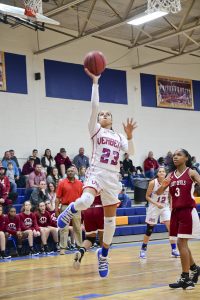 Jasmyn White drives to the basket. (Photo by Anthony Richards)

“She’s our senior leader and really takes over when she’s needed,” Sneed said.

Pushing the pace is a style of play that Verbena has become accustomed to under Sneed.

“We really don’t like slow,” White said. “We want to get the ball off the rim and go.”

“When she learns how to play defense real strong, she’s going to be tough to beat,” Sneed said.

Verbena has a large group of sophomores that have been playing together since seventh grade.

That cohesion is evident in the team’s passing and defensive approach.

“When my girls get the ball, they immediately look for where the White sisters are and try to get the ball to them,” Sneed said. “They know that they [JaNiya and Jasmyn White] are prolific scorers and will take it straight to the basket. As long as we get a win at the end of the night, my girls don’t care how the points come.”

According to Sneed, Dakota Adams is among the group of reliable sophomores.

“She’s a leader even though she’s younger,” Sneed said. “She’s a really great shooter, but she’s always looking to distribute the ball.”

Verbena will play the winner of Isabella and Chilton County in the county championship beginning at 5 p.m. on Dec. 21.

“I think we’ve come together, and we know that we have to work as a team if we want to be champions,” JaNiya White said.