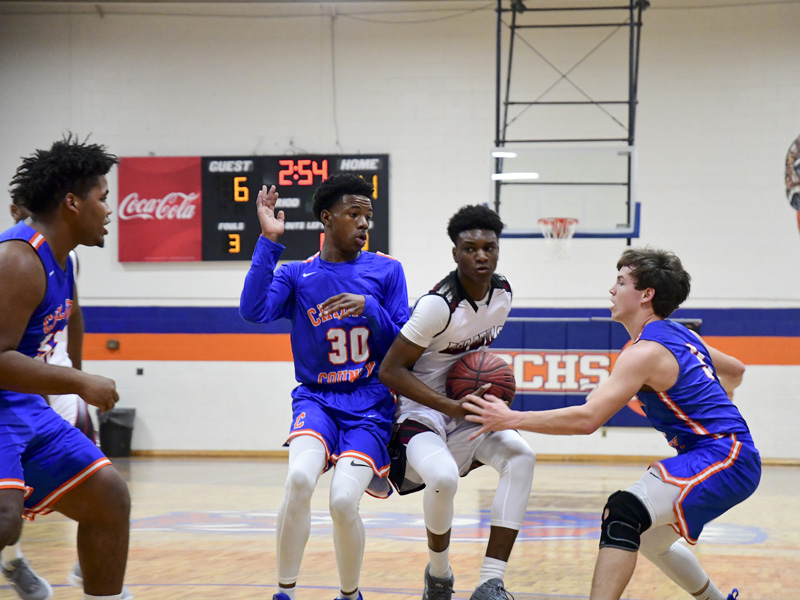 Keyuntay Kine (No. 30) and Dalton Patterson (No. 3) of CCHS cutoff a drive by a Maplesville ball handler. (Photo by Anthony Richards)

Chilton County High School started fast and then survived a fierce second half rally to defeat Maplesville 58-53 in the boys semifinal matchup on Dec. 19.

The Tigers were hitting their strides early on and opened up a 32-18 halftime lead thanks to 11 first half points and a trio of 3-pointers from senior Jack Parnell.

According to CCHS senior Keyuntay Kine, the mindset defensively heading into the game was limiting Maplesville’s open looks from beyond the arc.

The Tigers did a decent job of that until the third quarter when Maplesville’s Jackson Abbott found his groove and drained four shots from bonus land to close the gap.

Abbott finished with a game-high 22 points.

After the big third quarter by Abbott, the CCHS defense tightened up once again in the final quarter.

“We had to arrange the defense to where he couldn’t shoot, because if he gets open shots we’re in trouble,” Kine said. 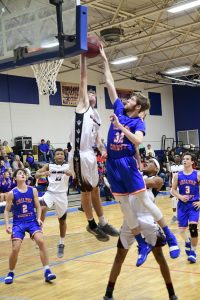 Maplesville’s Jackson Abbott blocks the shot of Adam Jacks (No. 32) of CCHS. (Photo by Anthony Richards)

The Red Devils grabbed their first lead of the contest after Jakavian Mckenzie hit a free throw to make it 46-45 with 5:04 left to play.

The momentum eventually swung back in favor of CCHS, as the Tigers made free throws of their own down the stretch to extend the lead once and for all.

Kine and DaFaebian Wright both knocked down shots from the charity stripe that wound up making a difference in the final outcome.

According to Wright, he hopes to bring more energy from his role in the paint moving forward.

“We’re finding those good connections out there,” Wright said.

One of the goals heading into the contest was limiting turnovers and mistakes with the ball.

Shoring up the turnover problems is something that Kine took to heart as a guard.

“I’m a point guard, so I feel like I’ve got to help take control,” Kine said. “We only had five turnovers in the first quarter, when in other games it’s usually been like 13. Less turnovers means more wins.”

CCHS lost several key contributors from last year’s squad that won the county tournament, but the current crop appears to be developing their own cohesion.

“We learning to play with each other,” Kine said. “We lost a few [playmakers], so we’ve got to gain a few.”

With the win, the Tigers advance to the championship game and will play either Thorsby or Jemison on Dec. 21.