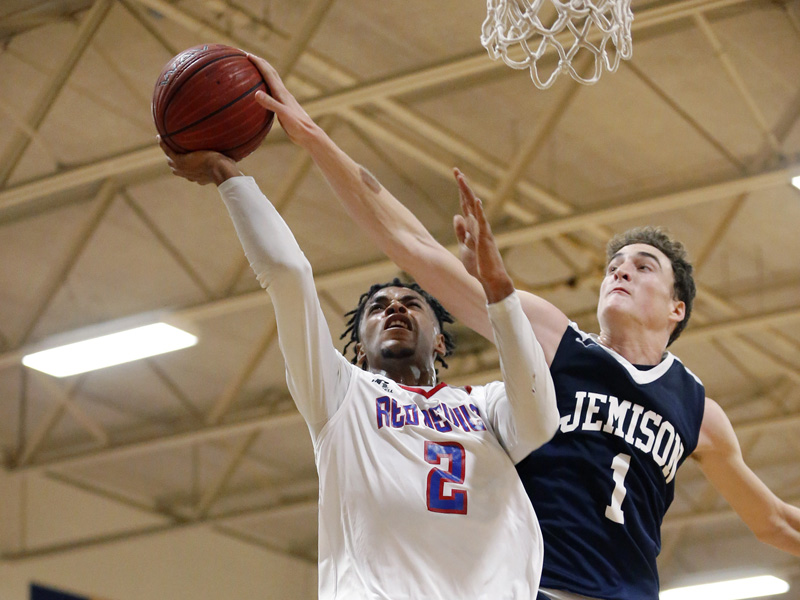 Nathan Johns (No. 1) of Jemison blocks the shot of Verbena’s Imani Walls (No. 2) during the opening round of the county tournament on Dec. 18. (Photo by Brandon Sumrall/Special)

The Jemison boys basketball team won its first game of the season, and it took place in the county tournament.

The Panthers held on down the stretch and defeated Verbena 55-54 during the opening round on Dec. 18.

“This really gives us confidence,” Jemison sophomore Nathan Johns said. “You’ve got to have a mindset to win.”

Jemison made some key stops defensively in the waning moments, which allowed the Panthers to preserve the narrow lead.

Johns grabbed a rebound and pushed the ball up the court where he found Heath Edge under the basket for the go-ahead layup with roughly a minute to play in the game.

“Our game plan is to work the ball inside and get to the free throw line,” Jemison head coach Undra Rush said. “The big guys came up big.” 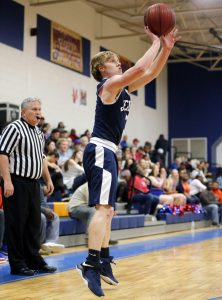 With Verbena trailing 55-53, senior Dawson Rohrbough was standing at the free throw line with a chance to even up the game 7.5 seconds remaining.

However, he made one of two attempts, but the Red Devils maintained possession after the miss went out of bounds off of a Jemison player with 5.8 seconds to go.

On the ensuing inbound pass, Xavier Dejarnett had a look at a 3-pointer in the left corner, but it rimmed out as the clock ticked down and the buzzer eventually sounded to end the thrilling contest.

The Red Devils led Jemison 27-22 at halftime, as the Panthers started the game slow.

“We’ve come out slow in every game, but then in the second half we seem to come out firing,” Rush said. “If we can get that chemistry all the way from the first quarter until the end, we’ll be a pretty good team.”

According to Rush, he has seen leaders, such as Hilyer, step into leadership roles despite their lack of experience.

“It’s a good example that these young guys are buying into the process,” Rush said.

Next up for Jemison is a matchup against Thorsby in the semifinals on Dec. 20, where starting fast could be the difference in the game.

“We’ve got some heart, but we’ve just got to start off stronger,” Rush said.