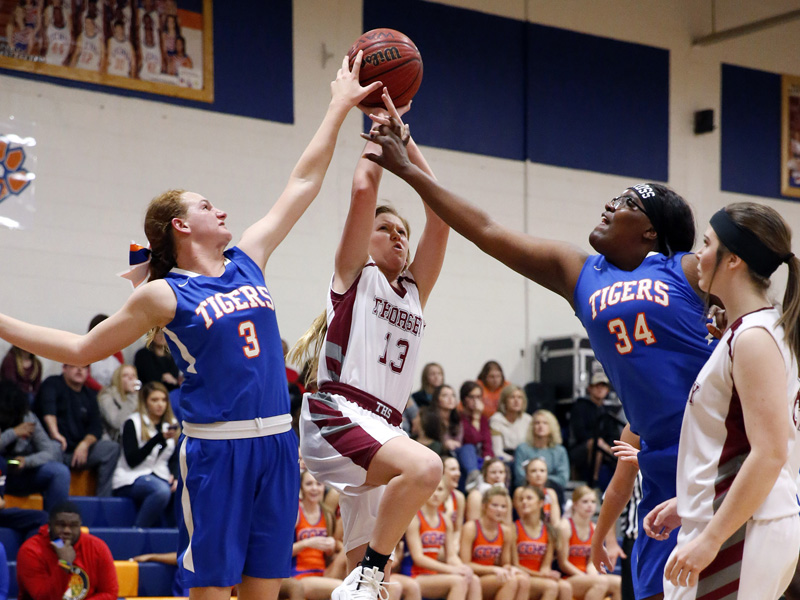 Marlie Giles (No. 3) and Kiara Steele (No. 34) of CCHS collapse defensively on Thorsby’s Cameron Lockhart (No. 13). (Photo by Brandon Sumrall/Special)

Pressure defense was the key to the Chilton County girls basketball team’s 60-41 victory against Thorsby in the opening round on the county tournament on Dec. 18.

The Tigers cranked up its full court press and turned a 3-point halftime lead into a 19-point victory.

“We thought that if we pressured the ball more [coming out of halftime] that we could create some more turnovers, and we did,” CCHS head coach Rachel Argent said.

The ability to knock down shots in the second half allowed CCHS to setup its defensive scheme, which proved to be a puzzle the Thorsby backcourt was unable to solve.

Turnovers resulted in points and easy baskets at times for CCHS.

“It was a lot of adversity, but we made it through in the second half,” CCHS senior Holley McKinnon said. “Coach got us a game plan [at halftime] and we were able to come out and execute.”

The Rebels were relentless at chasing down loose balls and gathering long rebounds throughout the game and continued to claw away at the deficit. 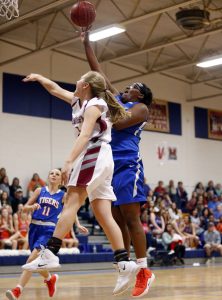 However, Thorsby lost a pair of impact players to foul trouble within a minute of each other.

Lindsey Wood fouled out with 3:58 left in the fourth quarter, and Emily Jones followed suit shortly after with 3:37 remaining.

Kiara Steele of CCHS led all scorers in the game with 23 points, while Adi Argent added 14 points for the Tigers, all coming in the second half.

According to Rachel Argent, Kiara Steele was dealing with a shoulder injury but is better and the hope is to get Adi Argent back at full strength. However, Jasmine Martin is out for the season and the rest of the team must continue to learn how to compensate for that void.

“We are playing some very inexperienced players in some very key positions,” Argent said. “Our injuries have hurt us and changed our game plan. She [Martin] has done a great job on the bench just encouraging and keeping people pumped up.”

The Tigers will play Isabella in the county semifinals on Dec. 20.