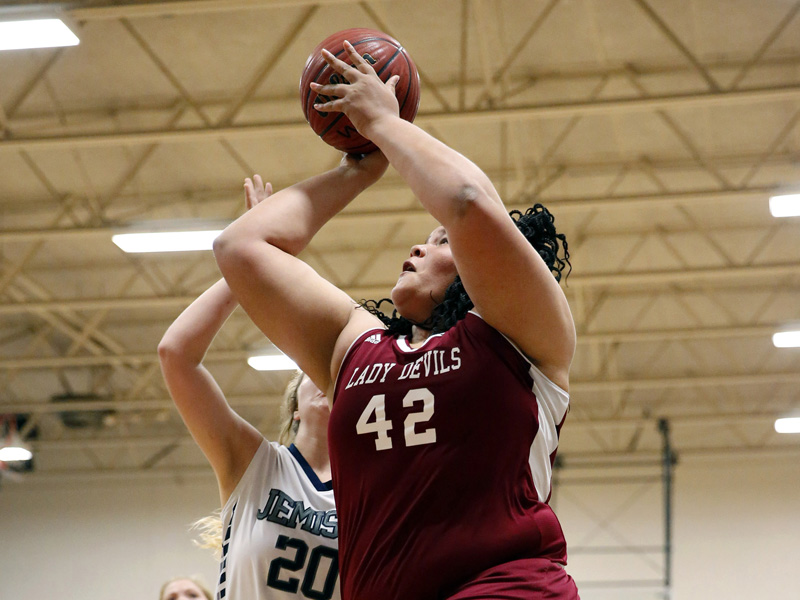 Tydasia Davis works her magic in the post against Jemison in the first round of the county tournament on Dec. 17. (Photo by Brandon Sumrall/Special)

The Maplesville Red Devils girls basketball team pounded the post en route to a 42-37 victory over Jemison in the opening round of the Chilton County Tournament on Dec. 17.

Jemison had no answer for MHS senior Tydasia Davis, who was a one-person wrecking crew down low.

Davis finished with a game-high 26 points, 13 of which came in the fourth quarter as the Red Devils were able to extend the lead for good.

“She’s been to numerous camps, and it’s time to start utilizing her size and those skills to execute in the ballgame,” Maplesville head coach Eric Bailey said.

According to Davis, a mismatch in the paint was noticed heading into the game, and the plan was to take advantage of it.

The offense ran through Davis on the majority of trips down the court and her presence in the post allowed for additional scoring opportunities for her teammates as well.

“It creates driving lanes to shoot layups and also opens up opportunities for the back door pass,” Bailey said. 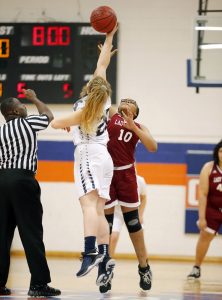 Alexis Bradley (No. 10) of Maplesville and Marybeth Porter (No. 25) of Jemison tip off the first round contest. (Photo by Brandon Sumrall/Special)

“We’re still a young team, but they’re growing and understanding the game,” Bailey said. “It’s just a process that you have to go through.”

Moore helped lead the fast break and pushed the ball up the court following takeaways.

“I thought the guards shared the ball well,” Bailey said. “One thing we’ve been stressing at the start of the season is becoming more of a team and spreading the ball around.”

Jemison received strong guard play on the night. Haileigh Greer led the Panthers with 19 points, while Ashlee Hilyer added 13 points of her own.

The Panthers hit six 3-pointers in the contest.

With the win, Maplesville advances to the second round and will play Verbena on Dec. 19.

“We feel more confident and the energy is different this year,” Davis said. “We’re more of a family. This is great momentum, but now we’ve got to finish it out on a high note.”