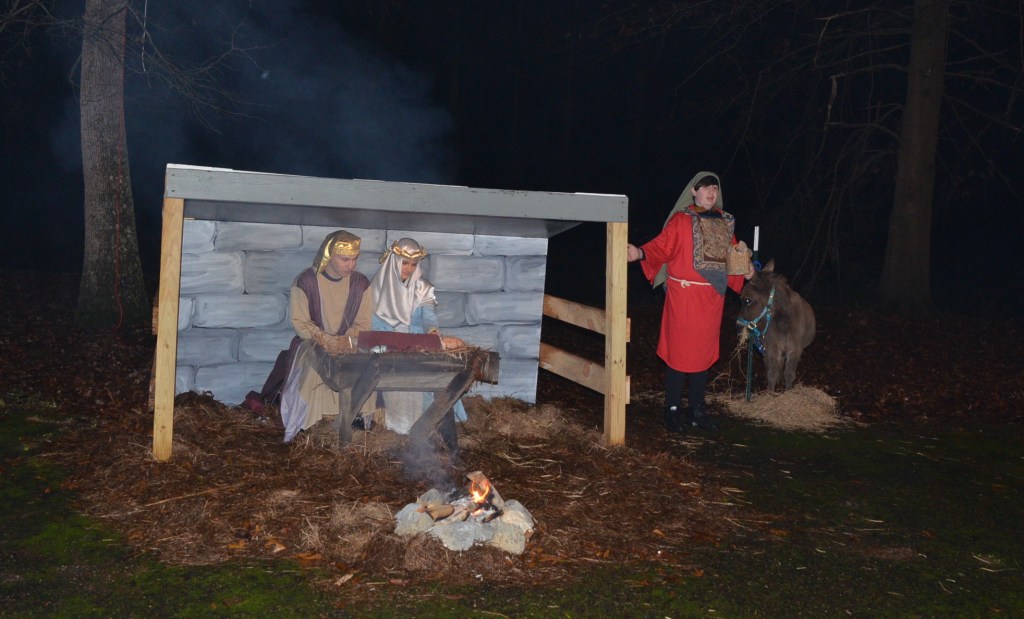 A shepherd narrated this scene of Joseph and Mary with Jesus in the manger. (JOYANNA LOVE/ ADVERTISER)

A once beloved tradition in Chilton County was revived this Christmas, as West End Baptist Church held the Living Christmas Walk at Goose Pond Park Dec. 15-16

Much like the wise men of old who followed a star, attendees followed a guide with a lantern from scene to scene in the darkness.

Spotlights lit each scene when it was time for that section to start.

The Living Christmas Walk had once been an annual event for the church, but Associate Pastor Eddie Lightsey said it had been several years since one had been held, and there were many members who had never participated in the past.

“The community asks us every year, ‘Are you doing the Christmas walk?’” Lightsey said. “It was time to start it back … We have about 250 people involved in the whole project.”

He said he has enjoyed “the excitement of bringing it back.”

“It has been a tremendous amount of work, but today — I’m giddy,” Lightsey said. “It is like Christmas morning because it is such a big thing we have done for our community.”

Event director Sam Hayes took the script the church had used in the past and added narrators from Jesus’ ministry to the Christmas scenes. In previous years, each group’s guide had served as the narrator. Hayes said this was “too much for one person to memorize.” He said he also wanted to incorporate more of Christ’s life into the storytelling.

Narrators Joseph, a Samaritan woman, a Roman centurion, the boy who gave five loaves and two fish and Lazarus told of what Jesus had done in their lives while sharing His story.

Matthew Williams played a shepherd. Williams said he wanted to participate because it was “important for everyone to know what Christmas is truly about.” This was his first time participating in the event.

Many of the scenes also had detailed sets to complete the scene. Each adult Sunday School class had a different scene to focus on bringing to life. The church’s youth group was also involved.

Youth Pastor Kenny Martin said he worked with students on the angels and shepherd’s scene.

“It’s when the angels appear to the shepherds and they tell them all about Christ. It’s one of those scenes that everyone oohs and ahhs over.”

Martin said the team read the Biblical account of the scene they would be acting out as well as showing the students videos of previous performances.

“I love to see the expressions on people’s faces when they hear the story of Christ; that is the best part,” Martin said.

Kenyon Easterling played the centurion who asked Jesus to heal his servant and narrated the scene where the wise men came to see Herod.

“This is what is it is all about,” Easterling said. “It is about the story of Jesus and God’s Son he sent to save us.”

The journey ended with hot chocolate and opportunities to talk to church members about any questions they had.

Hayes said the format of the event made it easy for the church members to share the message of Christ’s love and sacrifice with the community. He said he enjoyed seeing everyone “get involved in something.”

The West End Hand Bell Choir played a selection of 14 favorite Christmas songs to bring Christmas cheer as people waited their turn to enter the exhibit. Choir member Cheryl Perault said the group practices once a week and started on Christmas music in October.