Jennings moves one step closer on path to EMA 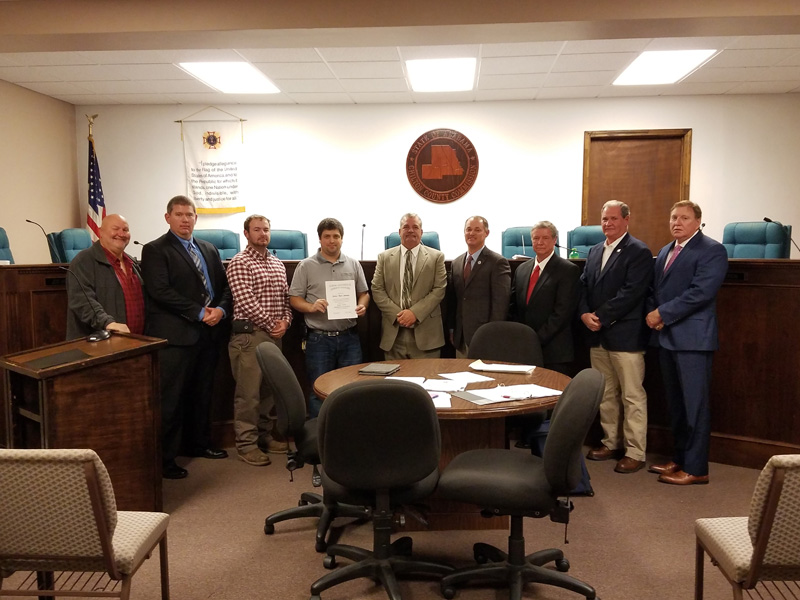 Josh Jennings of Clanton holds his basic level emergency manager certificate surrounded by the Chilton County Commissioners during its meeting on Dec. 11. (Photo by Anthony Richards)

Josh Jennings of Clanton received certification as a basic level emergency manager by the Alabama Association of Emergency Managers on Dec. 4.

“I’ve been studying emergency management for a significant amount of time, and Derrick has always been a mentor to those who are willing to learn,” Jennings said.

The courses were state and FEMA approved, some of which Wright had to sign off on.

“We do a lot of real-time exercises and try to go over every possible scenario,” Jennings said. “All of those things add up.”

At the moment, Jennings is on the Chilton County EMA volunteer list and can be called upon to help if an emergency situation arises.

“My eventual goal is to get a career in EMA and homeland security,” Jennings said. “If the community or nation calls me, I’m ready to serve. “I’m trained to be able to handle everything from school shootings to tornadoes.”

The certification levels after basic are intermediate, advanced and masters.

“I want to keep moving up,” Jennings said.

Jennings is 35 years old and has been working in government since he was 18 growing up in the Washington D.C. area.

“A lot of my Sunday school teachers were FBI and secret service,” Jennings said. “That always intrigued me.”

His dad is a firefighter at the Isabella Fire Department and was recently certified as an Alabama Fire College field instructor.

“We can’t ever have enough help from the community, especially when we have an incident,” Jennings said. “We’ve got to be ready to respond.”