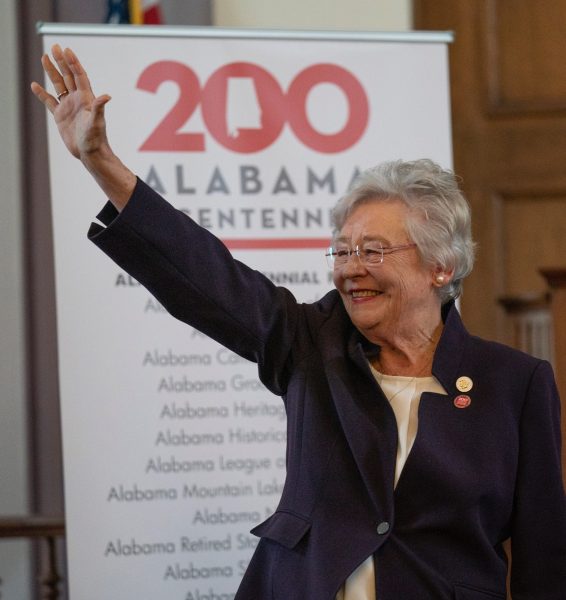 Gov. Kay Ivey kicked off the yearlong celebration of the Alabama Bicentennial on Dec. 14 in Montgomery. (CONTRIBUTED)

MONTGOMERY — Gov. Kay Ivey set into motion the year of celebration and education to coincide with our state’s bicentennial on Dec. 14 at the State Capitol.

“We have an opportunity in front of us, and just as Alabamians have done for the past 199 years, we will make the most of that opportunity,” Ivey said. “Alabama is defined by its people. It’s that simple.  As we near our state’s bicentennial, we recognize that our story of success is told by our people. And that is who we are celebrating: the Alabamians who got us here, all the men and women across our state today and the future generations of Alabamians who will help take us to even greater heights.”

There have already been a handful of events here in Chilton County in celebration of the bicentennial.

“Making Alabama: A Bicentennial Traveling Exhibit” was set up at the Clanton Conference and Performing Arts Center on the Jefferson State Chilton-Clanton campus from Nov. 3 through Nov. 21.

The exhibit highlighted the history of the state.

Each school received a $2,000 grant. Those funds are for projects to be undertaken that focus on contributing to the community and celebrating the state’s 200th anniversary.

There are 200 schools across the state that received the designation.

More than 400 events in 225 cities and towns celebrating the bicentennial will occur before the anniversary’s culmination in Montgomery on Dec. 14 of next year.

Sen. Arthur Orr previewed some of the upcoming events during the ceremony aided by some schoolchildren from Eden Elementary School in Pell City.

“It’s not just celebrations and festivals,” Orr said. “It’s almost impossible to estimate how many thousands of Alabamians are learning more about the state’s history through touring exhibitions, the journeys they are making using the Alabama PastPort book and app, or through the thousand teachers who will have been instructed on ways to teach Alabama history by the end of the bicentennial.”

Events range from celebrating the 50th anniversary of the role the state of Alabama played in landing a man on the moon to the revealing of a replica of the original state capital at Old Cahawba.

The anniversary celebrations will culminate with the dedication of Bicentennial Park in front of the Capitol in Montgomery.

— Joyanna Love contributed to this article.