Butterfly Bridge Children’s Advocacy Center held its first ever Christmas open house on Dec. 13 at its location in downtown Clanton.

According to Butterfly Bridge Executive Director Jana Zuelzke, hosting a Christmas open house has been something she has been thinking about doing for years.

“We want to add some Christmas cheer to our community,” Zuelzke said.

The idea behind the event was to give the public an opportunity to tour the facility and learn about what the organization does.

“Those that have not been to the center or [do not] realize what we do here for the child victims of abuse in our community every day can learn more about it,” Zuelzke said.

The center includes interview rooms where victims of abuse can give their testimonies. There are two separate rooms depending on the age of the child.

It was not just new faces that stopped by the open house, but also many who understand the importance of the organization and wanted to show their continued support.

“We have a lot of our current supporters that have come out today,” Zuelzke said. “This is sort of a thank you for them.”

Finger food was provided to the open house guests, including chicken salad sandwiches and meatballs to go with lime sherbet punch that was labeled “Grinch juice.” 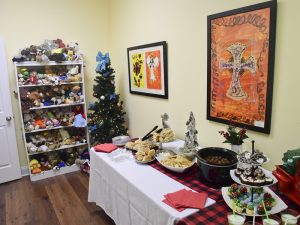 Finger food and punch were available to the open house guests. (Photo by Anthony Richards)

A shelf packed with stuffed animals stood in the corner of the room with the food. The stuffed animals can provide a sense of comfort to children during otherwise tumultuous times.

The open house took place at an opportune time with the holiday season known as a time of year that giving back is at the forefront of people’s minds.

It was also held less than two months prior to Flutter 2019, which is scheduled for Feb. 7 and is Butterfly Bridge’s marquee fundraiser.

Save the date cards for Flutter 2019 were handed out during the open house. Anyone can buy a ticket, be a donor or be a sponsor by visiting flutter.swell.gives for more information.

“It’s definitely a good time to get the word out,” Zuelzke said. “We want to encourage donations, because it will help sustain us through the rest of our fiscal year.”

Donations can also be made in honor of a loved one.

Butterfly Bridge is located at 603 Second Ave. N in Clanton.

“Every year more people become aware of what we do,” Zuelzke said. “We love this community, and they have really wrapped their arms around this organization, because they know what we’re doing is to help these kids that have been through the darkest times in their lives.”