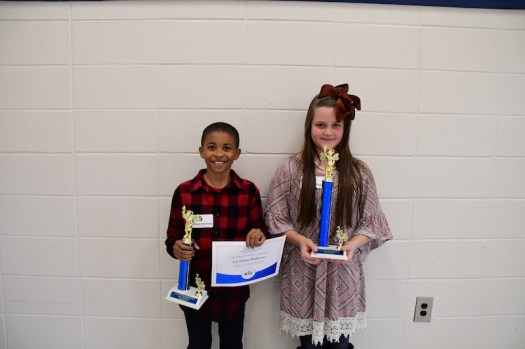 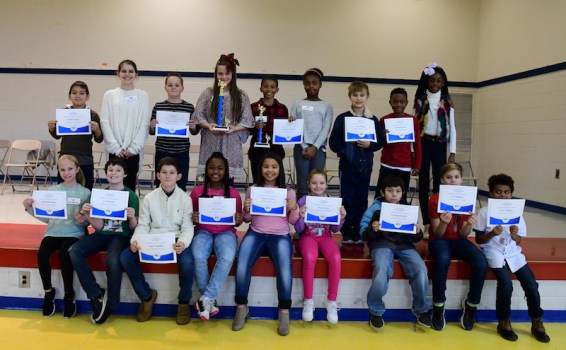 “To me, it was easier this year than it was last year,” Tilley, who is in fifth grade, said.

She said her family was very supportive of her participation this year.

“God helped me know all the words,” Tilley said. “He helped me remember them.”

Tilley studied for the bee by looking up pronunciations of the words on the competition list, so that she would know what they sounded like during the bee.

Last year, never hearing one of the words pronounced tripped her up.

She said she had read the word on the contest list, but “I thought it was a different word.”

She said she is hoping to do well in the higher level of the spelling bee for the potential scholarship opportunities. Tilley will represent CIS at the county level spelling bee.

Tayshaun Holloway finished in second place. He said he had been interested in participating “because I could learn a lot more vocabulary … and I just thought it would be fun to do when I saw the classroom ones.”

Holloway said he prepared for the competition by practicing how he was going to say and spell the words out.

Each student competed in a classroom spelling bee to secure a spot in the school-wide bee.

The opening word for the bee was game.

Some of the words that took students out of the competition included gremlin, supposedly, recognition, borrowed, shriek and peasantry.

Many of the words had homophones or could be confused with other words. Students were read a definition for these words prior to spelling the word.

When the bee was down to two students, the final student had to correctly spell two words in a row or the person who had misspelled the last word would be back in the competition and the two students would continue. Tilley correctly spelled humanitarian to stay in the round after her opponent misspelled a word. Percussion was her champion round word.

“This is a wonderful day, a wonderful opportunity for the students,” Principal Louise Pitts said of the spelling bee.

She thanked everyone who contributed to making the event possible.