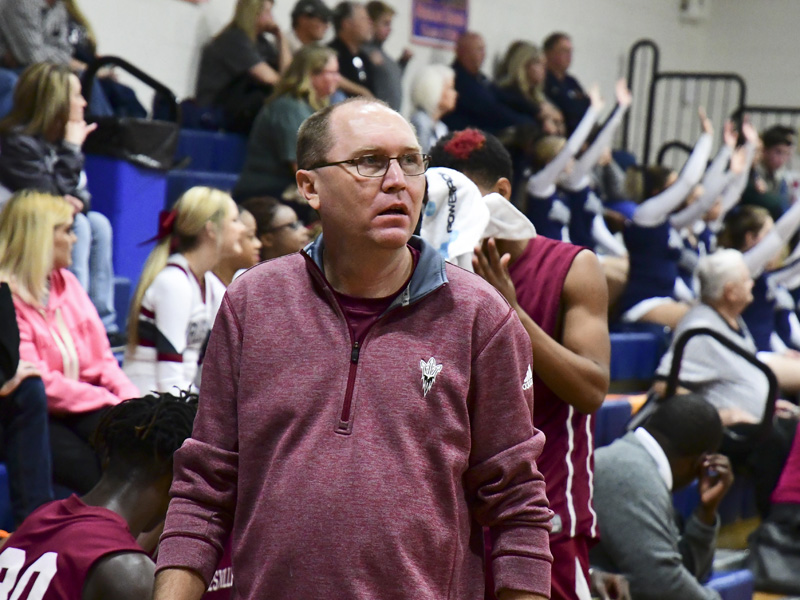 Stacy Mcgehee enters his second season as head coach of the Maplesville varsity boys basketball team. The Red Devils defeated Heritage Christian Academy of Hoover for its first win of the season on Dec. 11. (File photo)

Maplesville High School’s annual transition from a deep playoff run in football to the start of the basketball season was completed with a 57-54 victory at home against Heritage Christian Academy of Hoover on Dec. 11.

It was an evenly played game by both teams with the Red Devils (1-1) eventually ending ahead on the scoreboard after Kalan Hardy drained a pair of shots from the charity stripe with one second remaining.

Jackson Abbott started the game red hot from long range with five 3-pointers in the opening quarter, as Maplesville jumped out to a 12-4 lead.

However, Heritage Christian stole the ball and hit a layup to take the lead prior to halftime.

Abbott went on to score a team-high 25 points to go with six rebounds, three steals and two blocks.

He hit just one 3-pointer outside of the first quarter, and it came with 1:35 left in the game with Maplesville trailing by six.

Maplesville cranked up the pressure defensively and was able to force a couple of steals that led to points in the final minute.

Jakavian Mckenzie hit a couple of free throws to cut the deficit to one and Ajala Robinson followed it by leading the fast break and providing an assist to Ryan Morrow on the game-winning basket with 9 seconds left in the contest.

“My guys did a great job of increasing the defensive pressure in the last two minutes to give us the shot for the win,” Maplesville head coach Stacy Mcgehee said.

Mckenzie finished with 12 points and was active on the defensive end with five blocks and a pair of steals.

Morrow provided help on the boards with 10 rebounds as well as six points.

According to Mcgehee, one of the things the team still needs to work on moving forward is protecting the ball after forcing a turnover and a sudden change in possession takes place.

It was the second game in as many days for the Red Devils who lost 69-62 at home against Holtville in the season opener on Dec. 10.