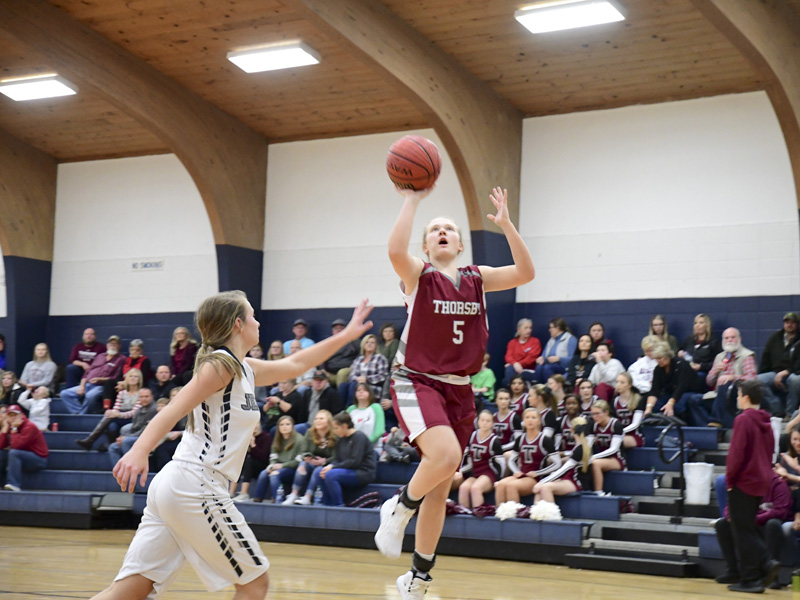 Carlee Wyatt (No. 5) of Thorsby scored a game-high 15 points during the Rebels’ win against Jemison on Dec. 7. (Photo by Anthony Richards)

The wins just keep on coming for the Thorsby girls basketball team, which improved to 5-0 on the season with a 47-27 victory against Jemison on Dec. 7.

Thorsby sophomore Carlee Wyatt was hitting her marks on the night and finished with 15 points to lead all scorers.

“We pretty much controlled the game the whole time,” Wyatt said. “A 20-point lead is always great.”

She started off hot with five points in the first quarter and made a trio of shots from beyond the arc in the game.

“I’ve learned that you’ve got to be confident in your shot, if you’re not, it’s not going to go in,” Wyatt said.

With the victory, the Rebels have already matched their five-win total from a year ago.

Wyatt can feel and see a difference in the team in year two under head coach Kris Wood.

“I definitely feel like we’ve worked a lot harder this year and have learned to play as a team,” Wyatt said. “Last year, with having a new coach, everything was a lot different. This year, the hard work is paying off.” 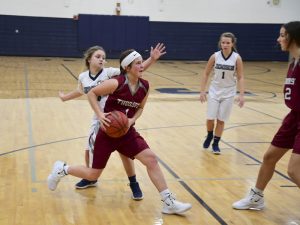 Thorsby’s (No. 1) Hannah Smith drives against Jemison’s Ashlee Hilyer in a game on Dec. 7. (Photo by Anthony Richards)

According to Wyatt, it takes some time for her to get comfortable again with her shot after playing volleyball prior to the basketball season.

“It’s really frustrating because the shots don’t fall like I want them to,” Wyatt said. “The more shots I take, the more comfortable I feel.”

Cameron Lockhart and Lindsey Wood each added a pair of long-range bombs in the game. Lockhart finished with eight points, while Wood had six points.

The Panthers earned its second win of the season the night before, with a 55-20 victory against West Blocton on Dec. 6.

As Wyatt begins to find her shooting groove, that can only mean even more positive things for the Thorsby offense moving forward.

“I feel like people kind of underestimate us, because we are younger,” Wyatt said. “We have talent and 11 girls that can play basketball.”