Red Cross in “urgent” need of blood during holidays 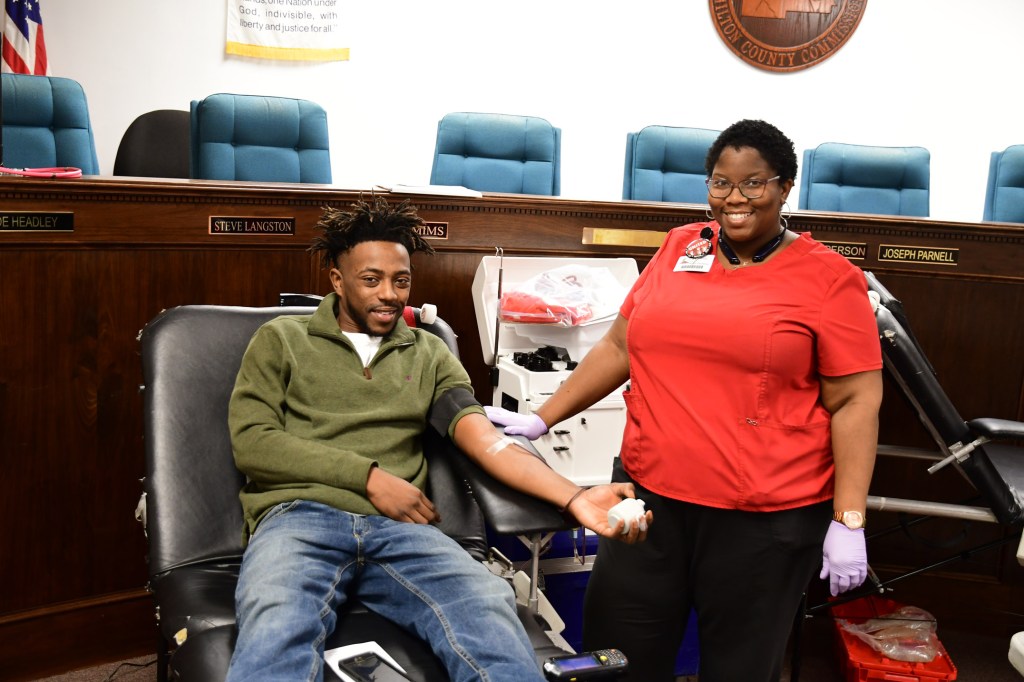 Kelby Watson of Jemison donates blood to the American Red Cross during a drive in the Chilton County Courthouse on Dec. 7. (J.R. TIDWELL/ADVERTISER)

Representatives from the American Red Cross set up in the Chilton County Commission meeting room in the basement of the courthouse to host a blood drive on Dec. 7.

According to account representative Laura McCormick, the Red Cross is in “urgent” need of blood during the holidays.
“During the holidays there is more of a need,” she said. “There are more accidents and less people giving.”

The blood drive on Dec. 7 was scheduled to be held at Chilton County High School, but an event at the school forced the Red Cross to find another venue.

“It was a bad time for them,” McCormick said. “We had planned for months in advance. We still need to be out collecting blood, so that’s why we shifted over here.”

They reached out to Sheriff John Shearon, and he helped the group secure the Commission meeting room in which to set up for the day.

“We appreciate the Sheriff’s Office for stepping up and making sure we had a place to hold this,” McCormick said.

Kelby Watson of Jemison was one of the people who donated blood to the Red Cross during the event. Like many donors, he did not have an appointment before signing up.

“These lovely young ladies found me in the hallway, and I felt like saving a life,” he said. “I have donated maybe three times before. Anytime I can help it makes me feel good.”

Watson said that while the needle used as part of the donation process may seem big, “the pain is not bad.”

McCormick said that many people think they cannot donate blood for a couple of different reasons.

“A lot of people are afraid of needles, and there are a lot of misconceptions about donating blood,” she said. “People think that if you are diabetic you can’t give, or if they are too old or too young. Diabetics can give blood. There is a certain list of medications that would preclude you from being able to donate, but most people can give so long as they are feeling well.”

Anyone interested in donating blood at an upcoming drive that is unfamiliar with the process may find more information at redcross.org. Potential donors are pre-screened to make sure they are qualified to donate.

The Red Cross will be hosting an event at Senior Connection in Clanton on Dec. 28, and the CCHS drive has been rescheduled to February of next year, though that is meant for students and faculty members.

“Students can give starting at age 16 but must have parental consent,” McCormick said. “Starting at 17 students can donate on their own.”

There will be another event coming up soon between members of local law enforcement called Battle of the Badges, where different first responders will compete to see which department can garner the most donors.

Potential donors need to make sure to eat the morning of a donation, stay hydrated and be feeling well.