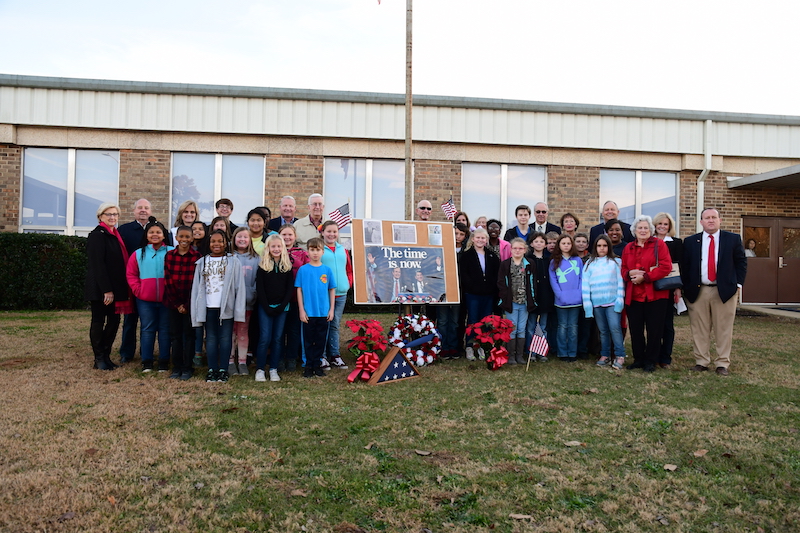 A temporary memorial to George H. W Bush was erected at Clanton Elementary School this week by the Chilton County Republican Party.

Clanton Elementary was one of three stops Bush made in Alabama during his 1979 campaign.

A memorial service at the school flagpole had been planned for Dec. 7 at noon. However, the service was canceled due to weather.

Instead, the memorial was moved inside to the library where each class came through to see it.

A presentation was made to second-grade students about the memorial and former President George H. W. Bush.

“When he decided to run for president, he came to this spot, where you are now with his wife Miss Barbara,” Mike Colson, one of the memorial organizers, said. “He wanted to come to an elementary school because education and children meant so much to them.”

Colson talked about the ways that this country honors the president, including funeral honors.

“For days, we have celebrated one of our presidents, George Bush (Sr.),” Colson said. “One of the last things we do for a president is we give them a big museum. Every president has a museum.”

A copy of the register with signatures from attendees to the temporary memorial will be be sent to the George H. W. Bush Presidential Library.

Guin said Bush had been set to attend Yale University, but “he felt like he had to join the military.”

“He flew a lot of missions as a fighter pilot for the United States Navy,” Guin said.

Guin said Bush was a committed patriot and asked people to be a “kinder, gentler nation.”

“In honor of George H. W. Bush, I have my crazy socks on,” Guin said. “If you saw a picture later in his life, anywhere, he would proudly show off his crazy socks.”

Several community members and some CES students had visited the memorial at the flagpole on Dec. 6.

Among them was Colson and Helen Edwards, two of the Chilton County residents that were a part of initial 1979 event.

Colson was in charge of publicity and working with the media, while Edwards worked on the dinner that was hosted for Bush after the announcement.

Colson said instead of presenting Bush with the customary key to the city, the mayor at the time, Frank Basil Clark, presented the presidential candidate with a possum and made him a member of the International Possum Growers and Breeders Association.

“He pulls out this beautiful white possum,” Colson said. “It wasn’t very big. It was like a baby.”

Colson said Bush’s eye were wide, and Barbara Bush “went hysterical. She was laughing so hard. I’ve never seen anyone laugh so hard.”

Bush accepted the possum, calling it a “unique honor.”

The temporary memorial will be available at the Chilton County Courthouse for view and opportunity to sign the registry Dec. 10-12.