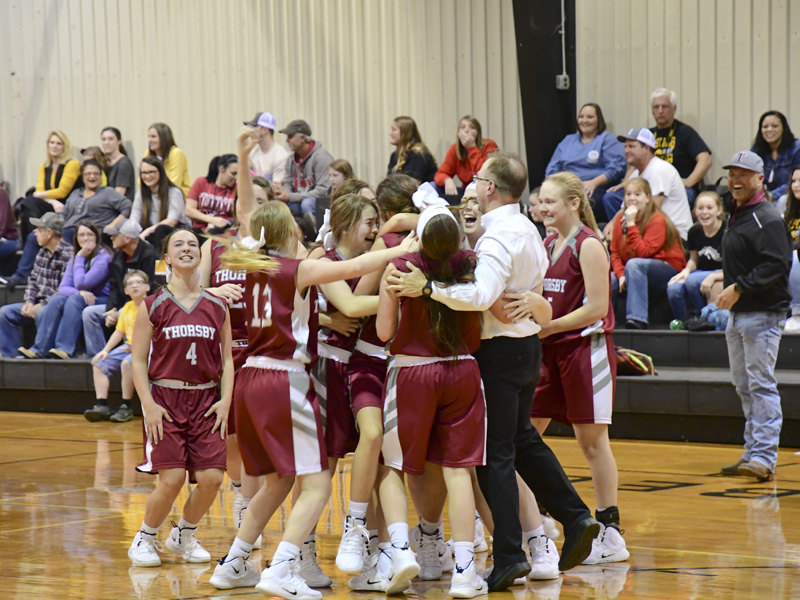 The Rebels celebrate as a team following the last-second victory. (Photo by Anthony Richards)

Thorsby’s Lindsey Wood intercepted an inbound pass near mid-court with four seconds left and quickly passed the ball to Emily Jones who scored a layup as time expired to give the Rebels a 31-30 girls basketball victory over Isabella on Nov. 30.

It was the only time that Thorsby led in the game, but it could not have come at a more opportune time.

According to Thorsby senior Hannah Smith, the final scenario was discussed prior to the play on the bench during the final timeout.

“That was a great decision by him [coach] to keep the tallest girl [Jones] down low,” Smith said. “We played together, and it took a team.”

Jones’ basket was the exclamation point on a big second half performance by the Rebels’ center that included a team-high 10 points, six of which came in the final quarter.

The game-winning basket was made possible as a result of the poise showed by Wood, who found Jones standing wide open under the basket instead of rushing a shot after jumping in front of the inbound pass.

Smith and Isabella’s Kiara Ford battled in the backcourt throughout the contest, as the senior guards went head-to-head on several occasions. 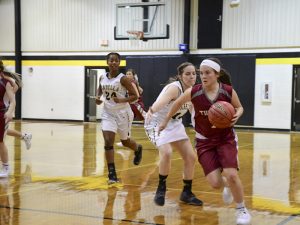 Ford led all scorers with 15 points, while Smith finished with six points. Nine of Ford’s points came at the free throw line.

“I knew I had to move my feet, because she was going to try to get around me,” Smith said. “There’s no doubt that she’s a great player, but I just had to stay on her.”

Smith is one of three seniors on the Rebels’ roster.

“They [teammates] look up to me in ways that I didn’t realize they would,” Smith said. “I feel like I’ve got to keep everyone calm, under control and going at a good pace.”

The Mustangs opened up a 10-2 lead at the end of the first quarter and maintained a 12-6 lead at halftime.

However, Thorsby’s offense began to pick up the pace and roughly tripled its output from the first to the second half.

According to Thorsby head coach Kris Wood, the Rebels’ showed the effort and hustle necessary to win, but just could not get shots to fall on offense.

“We never gave up and just kept fighting until the end,” Kris Wood said. “Everyone of our team contributed tonight.”

With the win, Thorsby improved to 3-0 and are already halfway to matching its six-win total from a year ago.