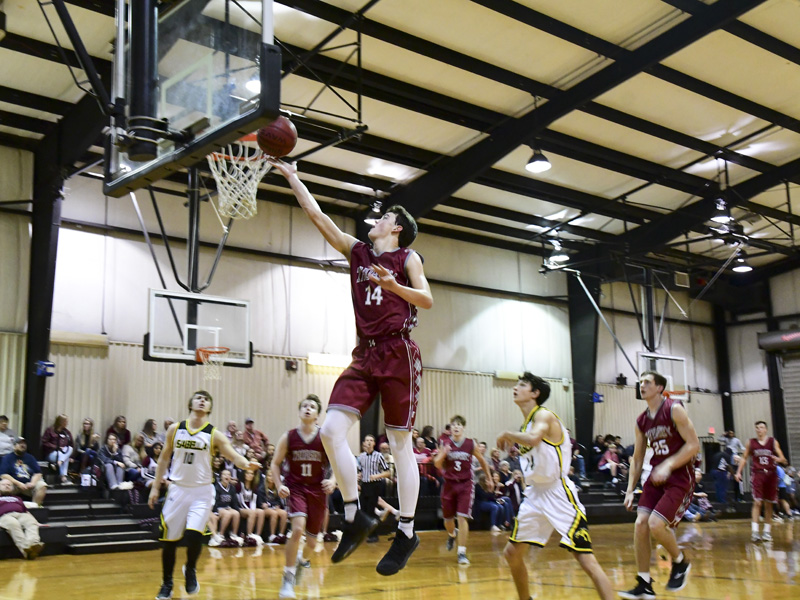 Thorsby’s Sawyer Sellers drives in for a layup against Isabella on Nov. 30. He finished with 13 points and 10 rebounds. (Photo by Anthony Richards)

A monumental deficit was quickly created, and the Thorsby Rebels defeated the Isabella Mustangs 61-26 during a boys’ basketball game on Nov. 30.

“Just about everybody on the team played football,” Thorsby head coach Tim Fortner said. “We’re finally getting in basketball shape and getting our basketball legs under us.”

Sawyer Sellers finished the game with a double-double performance of 13 points and 10 rebounds.

The Rebels are a veteran group with five seniors that have been playing together for several years.

However, Sellers is only a sophomore but continues to show progression in his second season starting at the varsity level.

“He [Sellers] plays AAU ball in the spring and summer, so he gets used to the higher level of competition,” Fortner said. “You can tell that he’s a lot more aggressive and confident in himself.” 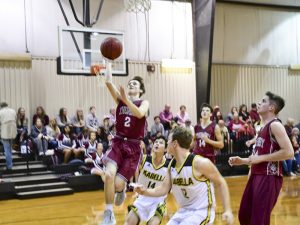 Cole Hight of Thorsby penetrates the lane against Isabella on Nov. 30. (Photo by Anthony Richards)

Both players were highly active defensively around the rim. They each blocked three shots apiece on the night.

“Him [Christian] and Sawyer are both really athletic inside and can get up and down the floor,” Fortner said.

The Rebels showcased their depth with nine different players finishing the game with points on the score sheet.

“No matter who I have in the game, we try to keep doing the same offense and defense,” Fortner said. “Everybody that goes in should know what’s going on and what they should be doing.”

The win came just one night after Thorsby suffered a 74-40 defeat on the road to legitimate state title contender Central Coosa.

Fortner understands that playing quality teams like Central Coosa serves as a measuring stick and will only help the Rebels continue to grow as a team.

“I told them that every time we play from here on out they should be playing Coosa, because we should be trying to get to their level,” Fortner said. “It’s the mentality that you’ve got to have.”