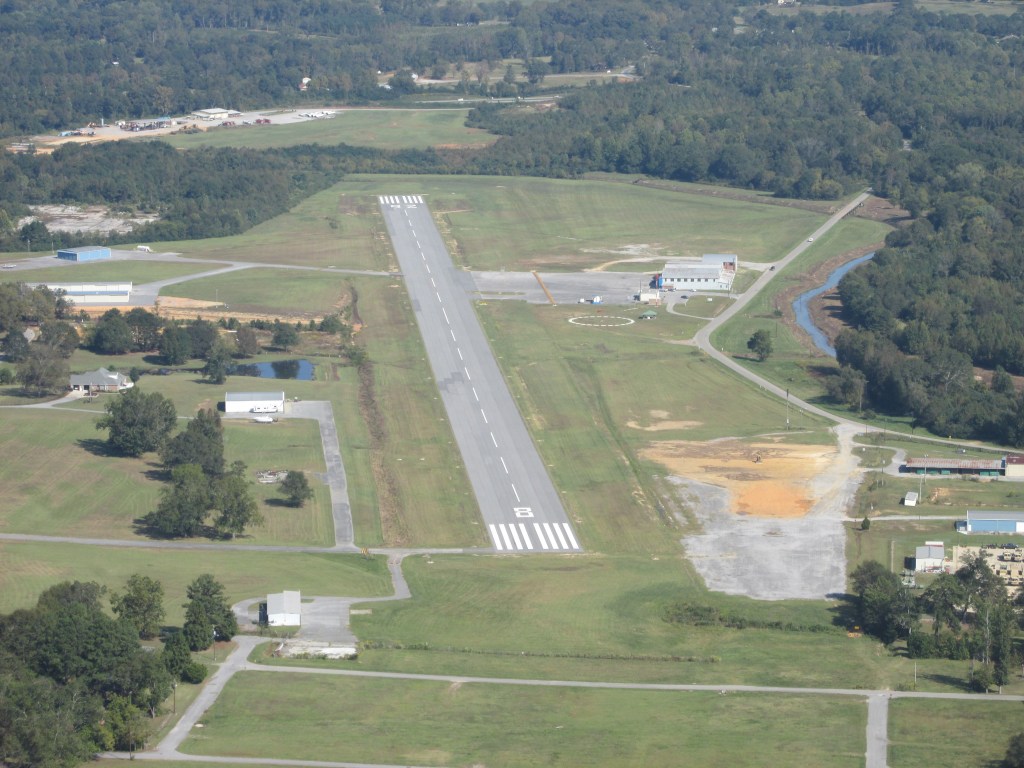 During 2014, the runway complex at the Chilton County Airport was rehabilitated utilizing funding from the Federal Aviation Administration. Local contractors were utilized to complete a significant portion of the project. (CONTRIBUTED)

When Chilton County residents look up in the sky, they might see a bird or even a plane, but definitely not Superman.

If they see a small jet or plane, it may very well be coming or going from the Chilton County Airport located just a mile east of Clanton.

According to Airport Authority board member Billy Singleton, the establishment was dedicated in July of 1937 and is “one of the oldest continuously operating facilities in the state of Alabama.”

“If you can picture what the airport looked like back then, we did not have a paved runway,” he said. “There was only one building, the brick building we call the WPA Hangar because it was built during the Works Progress Administration after the Great Depression. Back then, they didn’t have a specified landing direction; it was just a big field. They would always land into the wind. Airplanes couldn’t land out here when it was wet. They had to choose a direction, so they chose east/west, and paved the runway.”

Since 1937, the Chilton County Airport has undergone a lot of changes. Many improvements have been made with the goal of being more accessible and useful in mind.

In 1946, a large metal hangar, dubbed the Tuskegee Hanger, was brought to the Chilton County Airport from Tuskegee Army Airfield at the cost of $10,000.

“It was erected here and has served the airport continuously since that time, so it is more than 80 years old itself,” Singleton said.

The administration building at the airport was built in the late 1970s.

“That was the end of any additions for quite a period of time until about 1990, when the first set of hangars went up across the runway,” Singleton said. “Whenever we can put up hangars, it produces revenue for the airport.”

Singleton said the airport’s long-term goal is to “become essentially self-sufficient as far as funding goes.”

“We generate revenue on leases in hangars,” he said. “We lease our big hangar to B&G Flying Service, who run their business out of that with two full-time employees. We also do sales of fuel. Jet fuel is absolutely our biggest revenue source. Those are the primary means of generating revenue for the airport. That allows us to continue to improve the airport without depending on funding from the county or city.”

Another row of hangars was added to the airport about five years ago, with 30 craft now based out of the facility.

“All of those hangars are revenue-producing resource,” Singleton said. “The airport is financially solvent and actually doing pretty well. In 2016-2017 combined, we were able to re-invest $100,000 in revenue that we generated here back into the airport. Those are things we can use to better serve our citizens, and they didn’t pay a dime to do it. That’s something we are very proud of.”

The runway lighting system was “rehabilitated” in 2014.

“That was about a $2 million project,” Singleton said. “These projects we are doing are funded at 95 percent by the state and federal government. When I say the federal government, that’s not taxpayer money. That money comes out of an aviation trust fund that only aviation-related taxes are put into. When somebody says ‘I don’t want my tax money going to the airport,’ it doesn’t. It comes from airline ticket and jet fuel sales.”

Chilton County Airport is currently considered a general aviation community airport. The facility has a 4,000-foot runway and is accessible to small aircraft.

“What we would have seen 10-15 years ago was local people using the airport for recreational and other purposes,” Singleton said. “Our goal has been to move the airport more to serve everybody in the county, not just a few. The way we would serve it would be to do forest fire patrol flights and medical emergency flights. We have people that fly out of here virtually every day during the season identifying forest fires. We are the closest airport to the Alabama Emergency Management Agency operation system.”

The authority wants to get the facility classified as a general aviation regional airport, but in order to do that several changes must be made. The biggest of which is expanding the runway by another 1,000 feet.

“That’s the biggest challenge we’ve had,” Singleton said. “This airport has to meet certain safety standards. There was the very definite possibility of the airport being closed in 1999 because it did not meet those safety standards.”

He said that one of the biggest issues in the attempt to expand has been obstructions, more specifically trees and other objects that are within a certain proximity to either end of the runway.

“For every 20 feet, there is an imaginary line that goes up one foot,” Singleton said. “That slope has to be free of obstructions. If you can’t do that, they take away, what they call displace, runway away from you that is not usable based on those obstructions. We can’t just go into somebody’s yard and ask to cut their trees down. Essentially, we have to purchase that property so that we can control any future obstructions there. Since this process started back in 2006 or so, we have devoted about 90 percent of all our grants from the Federal Aviation Administration to acquire land to remove those obstructions. We have purchased more than 35 parcels during that time, and that’s what we are doing this year. We are acquiring additional parcels.”

While the airport will not and does not want to be on par with the larger airfields in Birmingham and Montgomery, Singleton said expanding the runway and completing all the other necessary steps to become a regional facility will have a positive economic impact on Chilton County.

Singleton said the vast majority of the traffic the airport sees now is “transient,” meaning the flights do not originate here and Chilton County is not their final destination.

“Primarily that is people coming into Chilton County to do business,” he said. “For example, Love’s truck stop typically establishes their businesses near an airport. Their corporate jet comes in here, they go do their business then load up and head back out. They will touch six or seven of their stores in a day. They are based out of Oklahoma; they are not going to drive. We are seeing an expansion of that kind of business being done here.”

Once the runway is expanded, more commercial traffic is likely to utilize the airport, which could lead to more businesses coming into the county.

“If we are not accessible and they cannot land here, we are going to be taken off the list for future development in a heartbeat,” Singleton said. “If we get to 5,000 feet, we can draw a 500-mile circle around us, which is an average business flight in jet in one hour. That opens up an entirely different potential customer base. If (a business) comes and looks at us, that’s the first step. Once they can get here, they will check into what else we have to offer.”

The airport will likely continue to receive government aid in its efforts to expand because of the multiple benefits to be found there.

“Because of our location, the Alabama Department of Transportation has identified us as a priority airport,” Singleton said. “Shelby County’s airport has run out of land to grow. We are the next guy down the line, and they see the value in this. They have prioritized our plans as far as funding. We are the only game in town between Shelby County and Montgomery. We are right here at the exits (on the interstate) and a mile away from the county seat. There are a lot of advantages to growing this airport.”