Veterans Day is not just a day to thank the men and women that served in the military, but also their families.

That was one of the messages shared by Col. Larry Vaughn of the Alabama Army National Guard to Jemison High School students during a Veterans Day program at the school on Nov. 9.

“No one dislikes war more than the ones who have to fight in them,” Vaughn said. “If you meet a veteran, please be sure to thank them and their families.”

Vaughn has served about 30 years in the military with three deployments during that time. He was born and raised in Clanton and now lives in Hoover. He graduated from Chilton County High School.

“The underlying message is always the same,” Vaughn said. “That kids understand the sacrifice and maybe take away a little more appreciation for what veterans and their families have done. Security does not just happen.” 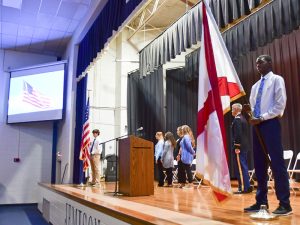 The national anthem is played prior to the start of the JHS Veterans Day program on Nov. 9. (Photo by Anthony Richards)

Vaughn’s dad was in the Navy, and that reflected in the type of person that he was.

“I was too young to actually be around during his service, but [I could see] the way that he carried himself and the things he learned in the Navy,” Vaughn said. “He was a confident man.”

Seeing the opportunities that the military provided his dad was enough to make him want to follow in his father’s footsteps in serving his country.

“What you find out is that almost every military member was influenced by somebody else in their family,” Vaughn said.

According to Vaughn, more than 850,000 oversea deployments since 9/11 have been assisted by the National Guard.

Vaughn has spoke at several schools over the years and been a part of various Veterans Day programs.

“It’s not that kids in Alabama aren’t patriotic, because they are,” Vaughn said. “It’s just a day to reiterate it a little bit more about what it means to be a veteran and have served.”

Thorsby falls in 1st round to Ariton

Thorsby’s record-setting season came to an end in the first round of the playoffs with a 41-14 defeat at the... read more