Chilton Christian Academy celebrated Veterans Day with a program at the school on Nov. 7.

“It’s important because the kids get to actually see those who have served our country,” CCA Principal Charles Gottshall said. “We want them to honor and appreciate them.”

CCA students invited veterans that they knew to attend the program. Those veterans were recognized up on stage along with the students who nominated them.

“In the world we live in right now, sometimes they [veterans] are put down for their service, because some just don’t agree with what their mission is,” Gottshall said.

“It’s important for us to support them, and we want the next generation to see that.”

It is one thing to hear about what veterans have done, but to see them standing up on stage can add another element of appreciation.

“It makes a big difference,” Gottshall said. “I did not serve, but my father did. I don’t understand sometimes what they went through as a veteran, but I appreciate what they did to defend my freedom.” 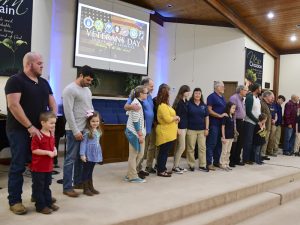 Veterans stand on stage with the students that invited them to be recognized during CCA’s program on Nov. 7. (Photo by Anthony Richards)

Andy Onchuck was invited by his 5-year-old son William to be recognized as part of the program.

He served four years in the Army 25th Infantry Division as a member of the airborne unit.

“I thought that was special,” Onchuck said. “We hadn’t really talked about it much, but it’s good that he understands what it means to have served. I think every school needs to honor its veterans.”

That experience helped him to become the person that he is today.

“It gave me more guidance in life,” Onchuck said. “I enjoyed it and learned a lot of lessons and to be more structured than I was. It really changes lives.”

Afterward, the veterans and students enjoyed doughnuts and conversation.

Students from various grades also came up and sang patriotic songs and provided a festive atmosphere during the program.

“We don’t hear those songs too often until we have this time of the year where we can spotlight our veterans and what our country stands for,” Gottshall said.

Veterans Day is not just a day to thank the men and women that served in the military, but also... read more