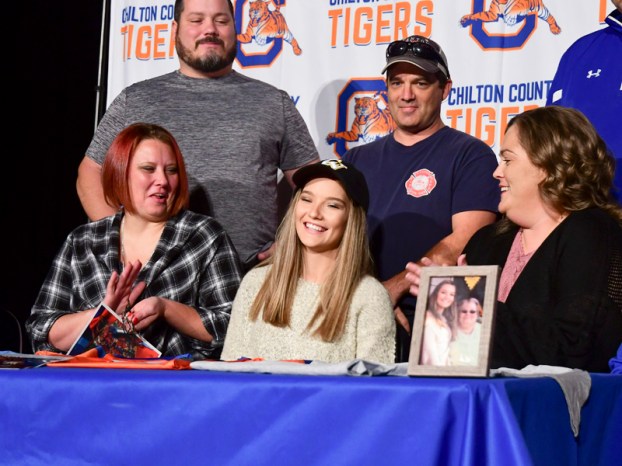 Caelyn Griffin of CCHS smiles after signing her softball letter of intent on Nov. 2. (Photo by Anthony Richards)

She went on several visits to various campuses, but there was something about CVCC that felt right.

“I met some of the girls that play there, and they just loved it,” Griffin said. “When I walked in there, I just knew.”

Griffin started playing softball in fifth grade and quickly fell in love with the game.

“I’ve been non-stop ever since,” Griffin said. “Travel ball, school ball, everything.”

When she was sitting up on the stage of the CCHS auditorium surrounded by her family, she could not help but think back at the past as she signed her letter of intent.

“I’ve been playing ball for a long time, and this is what I’ve been working for,” Griffin said. “It’s really just a dream come true.” 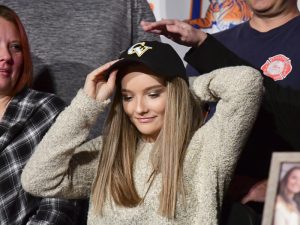 She realized during her freshman year with the Tigers that the potential to play at the college level was a realistic opportunity.

Griffin has played a lot of positions over the years but has settled into primary roles at shortstop, in the outfield or behind the plate.

“I have never just been one position,” Griffin said.

According to Griffin, the plan is for her to rotate between shortstop and catcher at CVCC.

Shortstop is a position that she has embraced over the years.

“That’s where all the action is, so I love it,” Griffin said.

Hitting is the aspect of the game that she has continued to work on the most throughout the years.

She began slap hitting in middle school as a right-hander and eventually learned to hit from the left side of the plate in high school.

“I’m proud of my hitting and how far it has come,” Griffin said.

Griffin believes that doing her signing early in the year will allow her to focus solely on the remainder of her senior year and the upcoming season with CCHS.

“You don’t even have to worry about it anymore,” Griffin said. “It’s a big relief.”

Softball alumni from Thorsby and Jemison took to the field once again as they came together and played in the... read more