The Thorsby Rebels continued their record-setting season by checking off two more items from the list following a 28-13 victory against Billingsley on senior night.

This year’s squad now holds school records for most wins and most points in a season.

“They are all great moments, but the main goal is to win a state championship,” Thorsby senior Christian Fortner said. “This was a huge wakeup call for us, and we’ll need to step it up for the playoffs.”

Thorsby finished the regular season with a record of 9-1, while Billingsley dropped to 5-5.

Just as Billingsley had seemed to grab some momentum and cut the deficit from two scores to one, Thorsby took it right back with a much-needed fourth quarter scoring drive.

“We knew we just had to stay calm and do what we do,” Thorsby lineman Kobe Davis said.

Fortner capped off the drive by running for a 1-yard touchdown run and the two-point conversion to extend Thorsby’s lead for good. 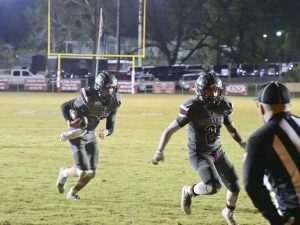 Christian Fortner (No. 25) of Thorsby follows the lead block of Brody Barnett (No. 2) on the game-clinching touchdown run. (Photo by Anthony Richards)

“That drive was huge for us, because we needed some confidence,” Fortner said. “We felt a lot more comfortable with that lead than we did before.”

Fortner ran for two touchdowns and also threw for a pair of scores to Chase Birchfield and Tyler Jackson.

Billingsley found success with its ground game, as Carlton McCary and Taylor Arington each ran for touchdowns on the night.

Jackson had two interceptions for Thorsby, while McCary picked off his fifth pass of the season for the Bears.

Both teams had clinched a playoff spot prior to the game. Thorsby will host Ariton (7-3) in the first round on Nov. 9, while Billingsley will travel to Elba (7-1 heading into the night).

“We’ve got a good senior group and everyone seems to be on line,” Davis said. “I think we can go far.”

By Brandon Sumrall / Special to the Advertiser The 2018 football season came to a wrap on Nov. 2 for... read more